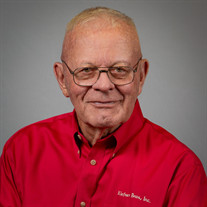 Ed Kiefner, 84 years old, died Saturday, July 4, 2020 at The Arbors in Cape Girardeau, MO. He was born September 7, 1935 to Edwin Luckey Kiefner and Elizabeth Kent Kiefner. Ed graduated from Perryville High School and then from Westminster College in 1957. He was first married to Patricia Barton Kiefner, who preceded him in death February 27, 2002. He then married Luanne Lough Kiefner August 31, 2003. He is survived by his wife, Luanne Lough Kiefner; sons, Kent (Kathy) Kiefner, Thomas (Nancy) Kiefner and Matthew (Karla) Kiefner as well as stepson, Barry (Sharon) Urhahn and stepdaughter Leigh (John Sheridan) Vosseller. He is also survived by grandchildren, Jenna Kiefner, Phillip (Nichole) Kiefner, Abby (Adam) Rowan, Joseph (Lauren) Kiefner, Blake (Hannah) Kiefner, Elizabeth Kiefner, John Kiefner, Paige (Trevor) Cook, Jacquelyn Kiefner, Madeline Urhahn, Grace Urhahn, Mikayla Vosseller and Hayden Vosseller; and three great-grandchildren Cate Kiefner, Willa Mae Kiefner and Braylan Dyer. Ed was commissioned as 2nd lieutenant in the US Marine Corps in 1957 serving over 30 years including overseas duty in Okinawa, Japan and South Korea. He retired as Colonel and served as commanding officer of the 3rd Battalion 24th Marines Reserve unit in St. Louis from 1972-1974. In 1968 Ed became president of Kiefner Brothers Inc, a third-generation family-owned construction company, until his retirement in 1998. During his career, he served on multiple boards including Citizen Electric, Southeast Hospital, Chateau Girardeau, Home Trust Mercantile Bank of Perryville, Boatmen's Bank, Montgomery Bank, Perryville Industrial Development Corporation, Perryville Board of Alderman, Cape Girardeau Chamber of Commerce, Lions Club of Perryville and Cape Girardeau, American Legion Post 1033, and Elks Lodge of Perryville. Of all the projects and accomplishments throughout his career, what brought him the most joy and what he was most proud of was being one of the founding members of Faith Presbyterian Church of Perryville (EPC) established in 2011 and officially recognized by the EPC in 2013. The church is located in the original Kiefner Lumber Company where Ed's career began. Ed had a great passion for fishing and hunting which he enjoyed for many years with his father and passed that love down to his sons and grandchildren. His favorite saying in later life was that he had two good wives and several great dogs. Friends may call 4 to 8 p.m. on Friday, July 10, 2020 at Ford & Sons Mt. Auburn Funeral Home in Cape Girardeau and from 9 to 11 a.m. on Saturday, July 11, 2020 at Faith Presbyterian Church of Perryville. Private family service will be at 11 a.m., July 11, 2020 at Faith Presbyterian Church of Perryville with the Rev. Bruce Owens officiating. Burial will be at Home Cemetery in Perryville with graveside military rites provided by Missouri Honors Team. Memorial contributions may be given to Faith Presbyterian Church of Perryville, 100 W North Street, Perryville, Missouri 63775 or Missouri's National Veterans Memorial, P.O. Box 566, Perryville, MO 63775.

The family of Edwin Kent Kiefner created this Life Tributes page to make it easy to share your memories.

Send flowers to the Kiefner family.