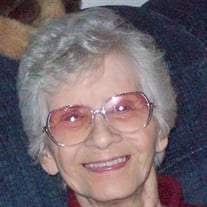 Our precious mother, Edna Louise Dunn Keesee, 92, went to her eternal home, Tuesday, April 26, 2022, to be with her Lord and Savior Jesus Christ. She was born Oct. 25, 1929 in Thebes, Illinois, the fourth daughter and youngest of eleven to Clyde and Ida Mae Dunn. She was a graduate of Thebes High School and worked at the Shoe Factory, as a bookkeeper at the Medical Arts Pharmacy and at Hartline Hardware as a clerk. Edna did volunteer work in hospitals and helped children that were handicapped. Edna married Vester "Sonny" Keesee April 21, 1951. They were married 65 years at Sonny's passing in 2016. Three children were born to their marriage, Karen, Cathy and Kenneth Keesee. Edna and Vester pastored several churches in Southern Illinois and Southeast Missouri. Three of the best times in Edna's life were her first flight on a jet, seeing her husband come home from Korea, and the birth of her children. Survivors include two children, Cathy (Darrell) Hobbs of Jackson and Kenneth Keesee of Cape Girardeau; six grandchildren, Candida Harper, Heather Lawson, Beth Raines, Michael Joe (Tiffany) Raines, Chad Huckstep, and Darren Hobbs; several grandchildren and great grandchildren; many nieces, nephews, great nieces and great nephews. She was preceded in death by her parents, her husband; daughter, Karen Garland seven brothers, three sisters, one grandson, Jeff Hobbs and one great-granddaughter, Kelly Wright. Visitation will be Thursday, April 28, 2022 from 10:00 to 11:00 a.m. at Ford and Sons Mt. Auburn Chapel. Funeral service will follow at 11:00 a.m. at the funeral home with Pastor Don Henson officiating. Entombment will follow at Cape County Memorial Park Mausoleum. In lieu of flowers memorials may be given to St. Jude Children's Research Hospital. A heartfelt thanks to Southeast Hospice for the excellent and compassionate care that Edna received during her final days.

Our precious mother, Edna Louise Dunn Keesee, 92, went to her eternal home, Tuesday, April 26, 2022, to be with her Lord and Savior Jesus Christ. She was born Oct. 25, 1929 in Thebes, Illinois, the fourth daughter and youngest of eleven to... View Obituary & Service Information

The family of Edna Louise Dunn Keesee created this Life Tributes page to make it easy to share your memories.

Our precious mother, Edna Louise Dunn Keesee, 92, went to her...