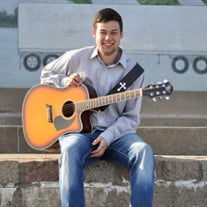 Dylan Michael Gadberry, age 25, of Bertrand, Missouri passed away from injuries sustained in a car accident on Saturday, April 3, 2021 in Morrisville, Missouri. Dylan was born August 21, 1995 in Cape Girardeau, Missouri, the son of Russell and Jennifer Felter Gadberry. He was a 2014 graduate of Thomas W. Kelly High School where he was known by many simply as “Gadberry”. Dylan earned a Bachelor of Science degree in Agribusiness, Plant and Soil Science from Southeast Missouri State University in 2019. He had a passion for learning and using the science behind farming and was known by his instructors as someone who “was always thinking” and engaging in class. Dylan was currently working as a Cultivation Associate for Flora Farms in Springfield, Missouri, advancing to Room Captain in his short time there. He developed several friendships and had much respect among his team. Dylan was a member of La Croix United Methodist Church. His love for Jesus and his desire to be a servant for Jesus was evident in the way he loved others. He was also an avid skateboarder and continued this passion throughout his childhood and high school years. One of his favorite activities was to travel with friends to various skateparks to skate until the sun went down and sometimes even under the stars. A talented musician, Dylan picked up his first guitar at age five. Taking a few lessons, but primarily self-taught, he continued to learn and play beautiful songs that he wrote, as well as favorites like ‘Hey There Delilah”, “The Hero”, and “Times Like These.” He dreamed of furthering his music and never passed up an opportunity to jam with a friend. Dylan loved being outdoors, planting beautiful things and cherishing the beauty of nature. Some of his favorite activities included fishing, as well as exploring trails, walking among botanical gardens, exploring local parks, and sitting around a blazing fire with the love of his life, Tangie. He adored his sister, Morgan. He was and will forever be her “bubby.” He was her friend and protector. She loved to accompany him to the skatepark, and he would grab her and move her on the ramps, balancing her on the board. They would jam together on car rides to school. He loved to watch her dance and would be there watching at every opportunity, never missing a recital or competition. He was her biggest fan. Always behind the scenes providing advice and encouragement, he was a devoted and loving brother. Dylan had a compassionate, loving spirit. He noticed when there was a need. He listened to your heart. As a child, he would take note of those who were hurting and insist, “We’ve got to help them!” As an adult, his ability to love fully and see into one’s heart continued. His hugs were like no other. You could feel his love in that squeeze every time. Loving survivors include his parents, Russell, and Jennifer Gadberry of Bertrand; sister, Morgan of Bertrand; girlfriend, Tangie Plaskie and her mother, Kellie Hill both of Sikeston; maternal grandparents, John, and Janet Felter; paternal grandmothers, Debi Stone and Cindy Gadberry; uncle, John (Brittany) Felter; aunts, Maria Stone, Michelle Perkins and Megan (Robbie) Poley; numerous cousins whom he dearly loved; and a family of friends and acquaintances who describe him as the one they could always count on to provide help, a listening ear, or make them laugh with his silly impressions, goofy faces, or just simply by laughing himself. He was preceded in death by his paternal grandfathers, Rick Gadberry and Steve Stone; and an aunt, Samantha Gadberry. Visitation will be 4:00 pm to 8:00 pm on Monday, April 12, 2021 at Ford & Sons Benton Chapel in Benton, as well as Tuesday from 9:00 a.m. until service time. Funeral services will be at 11:00 am Tuesday, April 13, 2021 at Ford & Sons Benton Chapel with J.T. Thomason officiating. Cremation care will be accorded following ceremonies. In lieu of flowers, donations may be given to the Dylan Gadberry Memorial Account to be used for a Memorial Park and a Memorial Scholarship. Dylan Gadberry Memorial Account c/o First Midwest Bank of Dexter, Sikeston Facility 630 N Main Street, P.O. Box 250 Sikeston, Missouri 63801.

Dylan Michael Gadberry, age 25, of Bertrand, Missouri passed away from injuries sustained in a car accident on Saturday, April 3, 2021 in Morrisville, Missouri. Dylan was born August 21, 1995 in Cape Girardeau, Missouri, the son of Russell and... View Obituary & Service Information

The family of Dylan Michael Gadberry created this Life Tributes page to make it easy to share your memories.

Send flowers to the Gadberry family.