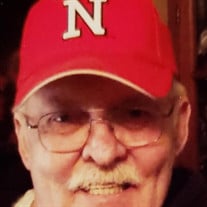 Duane "Mac" Darrald McKernan, 80, of Cape Girardeau, Missouri died Sunday April 10th, 2022 at the Lutheran Home. Mac was born December 14, 1941 on a Sunday, one week after Pearl Harbor, in Blue Springs, Nebraska to Edna Kerr McKernan. He and Janice J. Weiss were married June 6th, 1965 in Wall Lake, Iowa. Mac worked for Shelter Insurance Companies from 1968 to 2004 as a sales agent and manager. Mac served in the Army during the Vietnam War from 1968-1969, he loved his country and the flag. The family moved to Cape Girardeau, Missouri in 1982 after living in Lincoln, Nebraska for 15 years. He loved Nebraska "Big Red" football. He belonged to B.A.S.S. Masters Club in Lincoln and Cape Girardeau and thoroughly enjoyed fishing tournaments. He was a member of St. Andrew Lutheran Church and the local Elks Lodge for many years. Mac loved his family most. He is survived by a wife of 57 years, Jan McKernan of Cape Girardeau; two sons, Jason (Terri) McKernan of Columbia, Missouri and Toby (Becky) McKernan of Wentzville, Missouri; grandchildren include Kelly (Alex) Canote, Rachel McKernan, Zachary McKernan, Tristan McKernan, Hunter McKernan, Cooper McKernan; great-grandchildren, Anderson & Miller Canote. He was preceded in death by his mother, Edna Kerr McKernan and a brother, Don McKernan. There will be a memorial service at a later date.

The family of Duane "Mac" Darrald McKernan created this Life Tributes page to make it easy to share your memories.

Send flowers to the McKernan family.