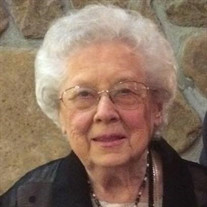 Dorothy LaVerne Huettig Bertrand, 95, of Cape Girardeau, died February 8, 2022 at her home. She was born in Cape Girardeau County August 28, 1926, daughter of Oscar and Frieda Klaus Huettig. She and Harry F. Bertrand (died April 24, 2017) were married August 31, 1946 in Perryville MO After graduating from College High School in 1944, she was employed by Rueseler Motor Co. She worked several years at the State Auto License Bureau. She retired as secretary to the superintendent of the Cape Public Schools in 1991 after many years there. She was a past president of the Alma Schrader PTA and the Cape PTA Council; active in the Girl Scouts serving as vice president of the Otakhi Council and troop co-leader. Life member of the Veterans of Foreign Wars Auxiliary 3838, serving as secretary, treasurer and president; served as VFW District 15 Auxiliary president and secretary of the Missouri State VFW Auxiliary. Also a member of the Mason O. Yarbrough Marine Corps League Auxiliary Unit 426. Active in the Cape County American Cancer Society for twenty-five years including serving as secretary and chairman of the Area Cancer Prevention Study. Member and past president of the Girardot Chapter of the the National Secretaries' Association (now IAAP). Member and past president of the local Mis-Sco-Deau Asociation of Educational Office Professionals; and member and past president of the Missouri Association of Educational Office Personnel (MAEOP). Was honored to be named the 1989 MAEOP secretary of the year. Life member of the National Association of Educational Office Professionals (NAEOP); Life member of the Missouri State Teachers Association (MSTA). Member of Trinity Lutheran Church, transferring from Hanover Lutheran Church in 1955. At Trinity she served several years as a Sunday School Teacher; Member and past president of the Trinity Ladies' Jr. Aid/LWML; member and past president of the Trinity Guild. Active member of the Lutheran Womens' Missionary League (LWML), serving as president of the Cape Girardeau LWML Zone from 1998-2002. Member and past president of the Hanover Ladies' Aid/LWML. She is survived by a daughter, Barbara Bage of Ballwin, Missouri; a son, Michael (Kim) Bertrand of Marion, Montana; a daughter-in-law, Cherri Bertrand of Jackson, Missouri; five grandchildren, Emily (Jon) Wade of Jackson, MO, Andrew (Bly) Bertrand of Jackson Missouri; Jonathan (Liisa) Bage of Helsinki, Finland; Brian (Shannon) Bage of Wildwood, Missouri and David (Stephanie) Bage of Apex, North Carolina; Nine great-grandchildren, Ayla and Autumn Bage, Peyton Bage and Linnea Bage; Kevin, Ben and Dominic Wade; Graham and Jagger Bertrand. Also surviving is a nephew, Richard (Lynnore) Meyer; and several great-nephews and great-nieces. She was preceded in death by her parents; her husband, Harry F. Bertrand; a son, Harry F.Bertrand Jr.; a brother, Wilbert Huettig; sister-in-law, Delma Huettig; a sister, Ruby Meyer; brother-in-law, Martin Meyer; nieces, Marilyn Huettig Mirly and Shirley Ann Roth; and son-in-law, Mark Bage. Visitation will be 12:00 pm to 2:00 pm Saturday at Ford & Sons Mt. Auburn Chapel in Cape Girardeau. Funeral service will follow at 2:00 pm Saturday at the funeral home with the Rev. Douglas Breite officiating. Burial will be in the Hanover Lutheran Church Cemetery. We would like to thank all of the individuals who helped Dorothy live an independent life in her home for all these years. To all of the family, friends, neighbors and health care workers, we say THANKS! Online condolences may be made at www.fordandsonsfuneralhome.com . Ford & Sons Funeral Home is in charge of arrangements.

The family of Dorothy Bertrand created this Life Tributes page to make it easy to share your memories.

Send flowers to the Bertrand family.