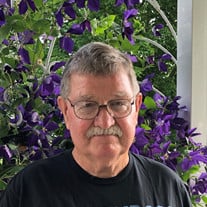 Donald Kneibert Lewis, 72 of Brazeau, Mo passed away October 8, 2020 at Mercy South Hospital. He was born January 27, 1948 in Jackson to Richard and Mary Elizabeth (Kneibert) Lewis. Don was a 1967 graduate of Jackson High School where he played football and was proud of dressing up as "Chief Raring Horse" in a parade. He was an avid Indian fan and St. Louis Cardinal fan. He proudly served in the U.S. Army and Vietnam War. After his service he took over his father's Mobil Oil Distributor business and later sold the business and went to work selling automobiles for Ford Motor Company. Don later was a bus driver for the Jackson School District, drove for SEMO Ready Mix and retired from RMC Perryville. After his retirement he drove for Superior Ag. He was a 4th Degree member of the Knights of Columbus, lifetime member of the VFW Post #3838, life long member of the American Legion Post #158, participated in the American Legion Honor Guard, donated almost 10 gallons of blood, was a volunteer Jackson Fire Fighter, Brazeau Cemetery Association Treasurer and was often referred to as the "Mayor of Brazeau" and "Smokey the Bear". Don loved to volunteer, hunt, go camping and was a bluebird enthusiast. He was known as a cornucopia of history and family information. He loved to talk with people and could easily strike up a conversation with a stranger. Don is survived by his wife, of 26 wonderful years, Rebecca (Becky) Weber Lewis; two beautiful daughters, Heather (Wayne) Brown of Jackson and Heidi (Scott) Little of Jackson; brother, Robert (Jean) Lewis of Port Angles, WA; sister, Mary Ann Haynes of Cape Girardeau; step-sons, Aaron (Amanda) Hager of Frohna, Joshua (Jerry Scott) Hager of Dallas, TX, Lucas (Kristin) Hager of Altenburg and Cody (Chelsey W.) Hager of Chicago. Don was a much loved Papa and shared a special relationship with each of his 7 grandchildren; Nicholas and Joshua McIntyre, Guthrie and Avery Hume, Madilynn, Jackson and Will Hager. Several nieces and nephews, and other members of his extended family. He was preceded in death by his parents, Richard and Mary Elizabeth (Kneibert) Lewis and beloved brother, Richard "Dick" Cyrus Lewis. The family will have a private funeral service at the Brazeau Presbyterian Church were there will be an Honor Guard service following in the Brazeau Cemetery. A camp fire celebration of life will be held from 2:00 to 6:00 p.m. November 7, 2020 outside the Brazeau Hall. In lieu of flowers, memorials can be made to the Brazeau Cemetery Association or Brazeau Presbyterian Church at 106 Church Lane, Frohna, MO 63748 Cape Girardeau County History Center, 102 S. High Street, Jackson MO 63755, or your local American Legion Post. Ford and Sons Funeral Home is in charge of arrangements. Online condolences may be shared at www.fordandsonsfuneralhome.com.

Donald Kneibert Lewis, 72 of Brazeau, Mo passed away October 8, 2020 at Mercy South Hospital. He was born January 27, 1948 in Jackson to Richard and Mary Elizabeth (Kneibert) Lewis. Don was a 1967 graduate of Jackson High School where he played... View Obituary & Service Information

The family of Donald Lewis created this Life Tributes page to make it easy to share your memories.

Send flowers to the Lewis family.