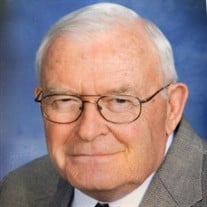 On Thursday, October 8, 2020, Donald Gene Kothe was called home to his Lord and Savior at the age of 86. He was born on June 24, 1934 in Salisbury, MO to parents Wilma Alita Bliefnick, and Orvil Henry Kothe. Don graduated from Salisbury High School in 1952, where he was an active leader-he was an Eagle Scout, served as FFA President, and played trumpet in the band. He actively participated on the basketball team, track team and church league baseball teams. Don was the first member of his family to graduate from college, earning a Bachelor of Science in Agriculture with a focus on Animal Husbandry from the University of Missouri, Columbia in 1956. While at Mizzou, Don joined the Alpha Gamma Sigma Fraternity, was a member of ROTC, and received recognition as a member of the Rough Nex Society, the State Farmer’s Degree, and the University of Missouri Judging Team. Following graduation, Don was commissioned as a Second Lieutenant in the United States Army. From 1957-1959, he served as an active duty artillery officer in Ft. Sill, OK, after which he was on active reserve through January, 1969. He received an honorable discharge as a Captain. Donald Kothe married Sherra Do Foard in Poplar Bluff, MO on January 29, 1956. He is survived by his wife, Sherra Do, and four children, Kerrye (husband Jon Foley), Kandye (husband, Scott Dille), Doug (wife, Adrianne), and David (wife, Julia). Don’s career began with Wilson & Co., a meat packing company, where he worked from 1959-1969. He went on to become the manager of the Macon Beef Packers (1969-1976). Don served as a Territory Manager of Hesston TM, a farm and agricultural equipment company(1977-1984), followed by a supervisory position at Banquet Foods(1984-1987), finishing his career working for AAL (Aid Association for Lutherans). Don and Sherra Do retired to Lake of the Ozarks, later making Cape Girardeau, MO their current home, near family. Don’s life centered around service to the Lutheran church, where he was an active member of the Missouri Synod. Don’s commitment and dedication to his faith was evidenced in his willingness to serve where called- as a member of the Elder Board of Zion Lutheran Church in Macon, MO, as a district board member of the Missouri Synod (8 years), as an usher, a Sunday school teacher, a Sunday School Superintendent, a Stephens Minister, a choir member, a Walther League member, an acolyte and as a leader of small group Bible studies. Don enjoyed playing golf, playing pool and bridge and following his beloved sports teams, the Missouri Tigers and the St. Louis Cardinals. Don was a Master Gardener and a Master Naturalist. He was a lifelong Republican and served as President of the Clay County Republicans and Campaign Manager for several Republican candidates. In addition, Don participated in Missouri State Republican conventions. Don was a much-loved grandfather of eleven grandchildren and great grandfather of seven. For his grandkids in particular, visions of hot summer days at the lake with Papa Don at the helm of his boat - ball cap perched atop his head, inner tube pulling them as fast as they could go across the choppy water, laughter filling the air - will forever be cherished. A Celebration of Life gathering is planned for 2021. You will be missed by all who knew and loved you, Don Kothe, and now it’s time to enter His rest. You have fought the good fight, you have finished the course, you have kept the faith! ( 2 Timothy 4:7).

On Thursday, October 8, 2020, Donald Gene Kothe was called home to his Lord and Savior at the age of 86. He was born on June 24, 1934 in Salisbury, MO to parents Wilma Alita Bliefnick, and Orvil Henry Kothe. Don graduated from Salisbury High... View Obituary & Service Information

The family of Donald Gene Kothe created this Life Tributes page to make it easy to share your memories.

Send flowers to the Kothe family.