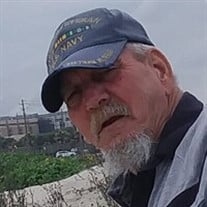 A Funeral Service for Donald E. Fritz will be held on Tuesday, March 29, 2022, at 10:30 a.m. at the Bauer-Torrey & Mach Funeral Home in Alma, Nebraska with Romey Waldrop officiating. Interment will be held at the Rosewood Cemetery in Malden, Missouri with Military Honors. Donald Edward Fritz, 74 years of age, of Franklin, Nebraska, passed away, on March 20, 2022, at CHI Health Good Samaritan in Kearney, Nebraska. Donald was born in Maplewood, Missouri on February 2, 1948, the fifth of six children, born to Jess and Opal (Napper) Fritz. He received his education from the St. Clair High School in St. Clair, Missouri. On January 15, 1970 Donald was inducted into the United States Navy where he served his country until his discharge on November 8, 1971. On May 13, 1972, Donald was united in marriage to Mary Perdue at the Assembly of God in Grey Summit, Missouri and to this union two children were born: Gloria R. and Mark E. The couple made their home in St. Genevieve, Missouri. Donald worked at St. Louis Southwestern Railway in St. Louis, Missouri as a locomotive mechanic. Together the couple enjoyed sightseeing at historical parks while traveling, and visiting family Donald enjoyed building muscle cars, riding motorcycles, fishing, camping, music by Elvis Presley, and was an avid game hunter. He was a member of the Bloomsdale Baptist Church and the National Rifle Association (NRA). Donald will be remembered for his big heart and kindness to people. He could make anyone laugh, and especially enjoyed spending time with his grandchildren. Donald was preceded in death by: his parents; his wife, Mary Fritz; one brother, Carl Fritz; one sister, Wilma Lee Fritz; and brothers-in-law: Kenny Volner; and Donald Imakuss. Donald is survived by his two children: Gloria R. Fritz of Perryville, MO; Mark E. Fritz of Franklin; four grandchildren: Adrianna (Briant) Brown of Franklin, NE; Austin Fritz of Bloomsdale, Missouri; Chassidy Blankenship of Bloomsdale; Aubrey Fritz of Franklin; one great-grandson: Greyson Brown of Franklin; one brother: Royce Fritz of Potosi, Missouri; two sisters: Dorothy Imakuss of Houston, Texas; and Sharon Volner of Steelville, Missouri; sisters-in-law: Sharon Fritz of Potosi; Ida May Fritz of Nashville, Tennessee; and a host of nieces and nephews, other relatives and friends. A visitation was held on Monday, March 28, 2022 from 5:00 p.m. to 8:00 p.m. with family greeting friends from 6:00 p.m. to 7:30 p.m. at the Bauer-Torrey & Mach Funeral Home in Alma. A graveside service will be on Friday, April 1, 2022 at 2:00 pm at Rosewood Cemetery in Malden, Missouri. Military rites will be provided by Missouri Honors Team. A memorial has been established in Donald's honor, and kindly suggested to the family for later designation.

A Funeral Service for Donald E. Fritz will be held on Tuesday, March 29, 2022, at 10:30 a.m. at the Bauer-Torrey & Mach Funeral Home in Alma, Nebraska with Romey Waldrop officiating. Interment will be held at the Rosewood Cemetery in Malden,... View Obituary & Service Information

The family of Donald E. Fritz created this Life Tributes page to make it easy to share your memories.

A Funeral Service for Donald E. Fritz will be held on Tuesday,...

Send flowers to the Fritz family.