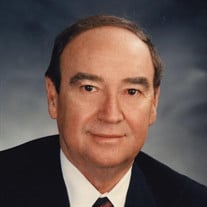 On May 20, 2021, after an extended illness, Donald L. Dickerson passed away peacefully at home with his wife and daughter by his side. He was born Dec. 4, 1931 in Jackson, Missouri, the only child of William Pearl Dickerson and Lillie Lucille Dickerson. He graduated from Jackson High School in 1954 where he was active in sports, debate and music. His lifelong love of music was inspired by his mother, a self-taught fiddler. He attended Southeast Missouri State College, now Southeast Missouri State University, and was one of the first to graduate with a liberal arts degree majoring in History. He was an excellent debater, participated in musical productions during his college years, and played guitar with local bands in the area. After graduation, he volunteered for the draft and was in the U.S. Army for 2 years. He trained as a radio communications operative, but was then stationed at a base near Anchorage, Alaska, where he served as the Post Exchange manager. After his service, he attended the University of Missouri Law school, thanks to help from the GI bill. After graduation from Law School he returned to Cape Girardeau, MO and practiced Trial Law for more than 50 years. He was genuinely liked, admired, and respected by his fellow lawyers. He served on the Board of Regents at Southeast Missouri State University from 1993-2004, and was President of the Board from 1996-2004. He was instrumental in providing the leadership to extend the University's educational mission to rural areas to Southeast Missouri through several outreach centers, and he worked for many years to promote the building of a River Campus for the Performing and Visual Arts. He is survived by his wife of almost 48 years, Jo Anne, a daughter Nancy Randol (Terry), 2 stepsons, Christian (Heather) Schulte and Matthew Schulte, as well as 9 grandchildren: Devin Dickerson and Bailey Randol, Megan, Amelia, Elisabeth and Cecilia Schulte, and Piper, Roxana and Milo Schulte. He was a loving husband, father and papa, and will be deeply missed. We are sad that he is no longer with us, but happy that he is now at peace. The family wishes to thank the nurses, aides and staff of Crown Hospice for providing him with compassionate care in our home for 9 months. According to his wishes there will be no visitation or funeral service. A celebration of his life with family and friends will be held at the family home at a future date. Memorial contributions may be given in his honor to the Donald L. Dickerson Scholarship for Theater and Dance at Southeast Missouri State University, or the charity of your choice. Ford and Sons Funeral Home has been entrusted with arrangements. Online condolences may be shared at www.fordandsonsfuneralhome.com

On May 20, 2021, after an extended illness, Donald L. Dickerson passed away peacefully at home with his wife and daughter by his side. He was born Dec. 4, 1931 in Jackson, Missouri, the only child of William Pearl Dickerson and Lillie Lucille... View Obituary & Service Information

The family of Donald L. Dickerson created this Life Tributes page to make it easy to share your memories.

Send flowers to the Dickerson family.