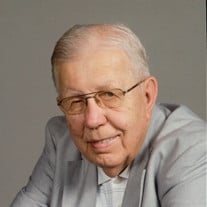 Donald L. Boeller, 84, of Cape Girardeau died Saturday, August 1, 2020 at his home, surrounded by his loving family. Don was born March 27, 1936 in Cape Girardeau, to Leslie and Alma Brunke Boeller. He and Janice Thomason were married July 12, 1958 at Trinity Lutheran Church. He was a 1953 graduate of Cape Girardeau Central High School. He was also a graduate of Trinity Lutheran School and a lifetime member of Trinity Lutheran Church, where he served as an usher for many years. Don worked at the Southeast Missourian newspaper. He started a summer job there at the age of 17, and retired in 1999 after nearly 46 years in the reproduction photography department. His work changed over the years as technology evolved from an engraving style to computer generated printing. He was an avid fisherman and enjoyed the peacefulness on a lake. Having a fish fry for his family and friends was something he loved to do. He also loved to go camping at Arrowhead Campground on Castor River. Don was an accomplished bowler, taking up the sport at the age of 12. His Uncle Turk Brunke was the manager of the bowling alley at Trinity Lutheran School, so he spent many hours bowling after school. By 13, he was bowling in three different adult leagues in Cape Girardeau. At the age of 15, Don was the adult league Cape County Bowling Association All Events Champion. Soon after, he began traveling to tournaments in the area, with his Uncle Turk as his doubles partner. Weekly league play in Paducah, Kentucky was broadcast on the local NBC station. While still a teenager, he was also chosen to play with an elite group of bowlers in tournaments, and once traveled by train to Fort Worth, Texas, to play in the ABC Tournament. One of the greatest joys of Don’s life was watching his children and grandchildren play sports. He and Janice rarely missed their children’s games, sitting in the stands watching with pride as they performed. As the grandchildren began to participate in sports, even playing against each other at times, they still attended and cheered on both teams. Survivors include his wife of 62 years, Janice; a son, Keith (Mary) Boeller of Cape Girardeau; a daughter, Sherri (Clayton) Shirrell of Cape Girardeau; grandchildren Kirk (fiancée Madison Blankenship) Boeller, Kristin (Jared) Roop, Erica (Zach) McCormick, and Lacy (Cory) Cissell; and great grandsons Carter, Easton and Tucker Cissell, Owen and Silas Roop, and Henry and Elijah McCormick. He was preceded in death by his parents, and many aunts and uncles. Visitation will be 4:00 pm to 7:00 pm Tuesday, August 4, 2020 at Ford & Sons Mt. Auburn Funeral Home in Cape Girardeau. Funeral service will be at 10:00 am Wednesday, August 5, 2020 at Trinity Lutheran Church in Cape Girardeau with the Rev. Douglas Breite officiating. Entombment will be at Cape County Memorial Park Mausoleum in Cape Girardeau. A face covering will be required to attend the visitation and funeral. Memorial contributions may be given to Trinity Lutheran Church, 100 N. Frederick St., Cape Girardeau, MO 63701, or the National Kidney Foundation, 30 East 33rd Street, New York, NY 10016. Ford and Sons Funeral Home is in charge of arrangements. Online condolences may be made at www.fordandsonsfuneralhome.com.

The family of Donald Leslie Boeller created this Life Tributes page to make it easy to share your memories.

Send flowers to the Boeller family.