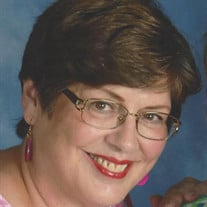 Diane Marie Mueller, 67, of Cape Girardeau went home to her Heavenly Father on Tuesday, July 20, 2021 at her home, surrounded by her family. She was born December 26, 1953 in Cape Girardeau to LeRoy John and Joyce Valerie Heuring Westrich. She married the love of her life, Stephen John Mueller, on December 27, 1974 in Cape Girardeau. Diane and Steve were blessed with two children, Jeffrey and Caroline, and four grandchildren, Logan, Aiden, Austin, and Addison. Diane lives on through her children and grandchildren whom she loved so dearly. Diane was a graduate of Notre Dame High School and received bachelor's and master's degree from Southeast Missouri State University. She taught for over 30 years in the Cape Girardeau Public Schools. Diane loved spending time with her friends and family, especially her grandbabies. She and Steve enjoyed many adventures together in their 46 years of marriage. The two often spent time at local wineries, tailgating at SEMO games, and spending time camping at Castor River. She was a devout Catholic and a member of St. Vincent de Paul Catholic Church. She shared her faith by attending eucharistic adoration at St. Francis Medical Center for 10 years, leading the rosary at her parish, and as a volunteer at Birthright. Survivors include her mother, Joyce Westrich of Cape Girardeau; husband, Steve Mueller of Cape Girardeau; son, Jeffrey Mueller of Robinson, Illinois; daughter, Caroline (Bryan) Coulter of Jefferson City, Missouri; two brothers, John W. Westrich of Cape Girardeau, Robert S. Westrich of Kansas City, Missouri; three sisters, Sharon K. (Don) Call of Cape Girardeau and Mary Sue (Neil) Conrad and Ruth A. (Jon) Parks, both of Jackson; four grandchildren, Logan and Austin Mueller and Aiden and Addison Coulter; and a number of nieces and nephews. She was preceded in death by her father. Friends may call 4:00 pm to 8:00 pm on Friday, July 23, 2021 at Ford and Sons Mt. Auburn Chapel in Cape Girardeau. Parish prayers and Knights of Columbus Rosary will be at 7:00 pm. Funeral mass will be 10:00 am Saturday, July 24, 2021 at St. Vincent de Paul Catholic Church with the Rev. Rick Jones officiating. Burial will follow at St. Mary Cemetery in Cape Girardeau. Memorial contributions may be given to Birthright, 2633 Hopper Road, Cape Girardeau, MO 63701. Online condolences may be made at www.fordandsonsfuneralhome.com. Ford and Sons Funeral Home is in charge of arrangements.

Diane Marie Mueller, 67, of Cape Girardeau went home to her Heavenly Father on Tuesday, July 20, 2021 at her home, surrounded by her family. She was born December 26, 1953 in Cape Girardeau to LeRoy John and Joyce Valerie Heuring Westrich. She... View Obituary & Service Information

The family of Diane Marie Mueller created this Life Tributes page to make it easy to share your memories.

Send flowers to the Mueller family.