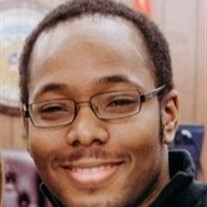 Derek Roszell Summers, Jr. (affectionately known as DJ) was the first-born child to Derek Summers, Sr. and Stephanie Johnson-Summers. He was born on February 1,1991 and departed on May 30, 2021, at Barnes Jewish Hospital in St. Louis, Missouri from complications of Covid-19. DJ bravely endured multiple surgeries and setbacks during his six weeks of hospitalization and had begun rehabilitation. He was determined to make a full recovery. He had started walking again a few days prior to the 30th and a longer distance each day. DJ and his wife, Amy Grace (Cunningham) started dating in 2013 and married on December 13, 2019. They enjoyed dinners, playing video games, volleyball and being with each other as much as possible. During his hospitalization, Amy temporarily moved to St. Louis to be at his bedside for countless hours providing emotional and physical care; as well as, providing updates for the family. DJ was well loved and his devoted Aunt Maria flew in from Georgia and also spent countless hours at his bedside providing nursing care and updating his family on his progress. His Christian faith was very important to him and was baptized at Cape First Church in Cape Girardeau, Missouri, in 2014. During the spring of 2014, he was awarded a "Perspectives on the World Christian Movement" certificate. He was president of the Remix Young Adults group. Travels to Trinidad in 2014 and Jamaica in 2017 were for mission trips. DJ graduated from Cape Central Senior High School in 2009 and Southeast Missouri State University with a Bachelor of Science in Computer Information Systems in 2016. One of his first jobs, was as a Receiving Associate for Sears. Prior to his hospitalization, he was employed as a Web Developer for Big River Communication. He loved fried chicken and more fried chicken with waffles!!! Marvel Universe was a joy for him and loved dressing with Batman paraphernalia. Volleyball was his favorite sport and favorite color was blue. Everyone who knew DJ, knew that he was a quiet, kind, friendly and standup guy. He enjoyed playing video games when he had free time. DJ is preceded in death by his grandfather, Charles L. Johnson, Sr. (Paw-Paw) and Grandparents, Willie and Versey Summers. He leaves to cherish his memory, his wife, Amy Grace Summers; his mother, Stephanie Johnson-Summers; his father, Derek (Tanya) Summers, Sr.; sisters, Brittani Summers (fiancé Demetrius Cannon) and Alexis Summers (fiancé Jake Fuemmeler); Emani Summers; grandmother, Sallie Johnson, bonus brother, Perry Harris, Jr. (PJ) and Brittany and their children, niece Makenna and nephew Myles, uncle, Charles (LaSaun) Johnson, cousins Morgan and Maya Johnson; aunts, Sandra, Valerie and Maria Summers: uncles Clyde and Claude Summers, aunt Gloria (Ira) Johnson and uncle Jerome Maclin, Jr. DJ's family would like to thank the medical care he received at Southeast Hospital in Cape Girardeau, Missouri and Barnes Jewish Hospital in St. Louis, Missouri for the excellent care and their valiant efforts to save him. Visitation will be 11:00 am - 1:00 pm on Saturday at Ford and Sons Mount Auburn Chapel in Cape Girardeau. The family requests a face covering to be worn during the visitation. There will be no public funeral service. Burial will be at Cape County Memorial Park Cemetery in Cape Girardeau.

Derek Roszell Summers, Jr. (affectionately known as DJ) was the first-born child to Derek Summers, Sr. and Stephanie Johnson-Summers. He was born on February 1,1991 and departed on May 30, 2021, at Barnes Jewish Hospital in St. Louis, Missouri... View Obituary & Service Information

The family of Derek Summers Jr. created this Life Tributes page to make it easy to share your memories.

Derek Roszell Summers, Jr. (affectionately known as DJ) was the...

Send flowers to the Summers family.