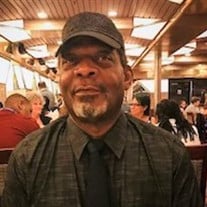 David Wayne Swan "Bud" left this world on Friday June 17, at his home in Troy, Missouri at the age of 64 years old. He was born April 14, 1958 and was the 4th child and 3rd son of the late Irvin and Marguerite Swan. He was raised in Jackson, Missouri and completed his schooling there also. He later moved to Cape Girardeau and eventually relocated to Troy, Missouri. until the time of his passing. David was known to so many as "Bud", a childhood nickname which was given by his male family members in memory of Mr. Bud Ricker. Ricker was a friend of his late father, who took a liking to him. David was known by many for lending a helping hand to anyone he met. He always loved being around his family. Rather it was on vacations, at family gatherings, or even just times when cooking on the grill was involved, David was the man that could be counted on. He leaves to cherish all those great memories with: Two sons- Austin and Demetrius Swan of Clarksville, TN. Siblings- Lawrence (Deronda K.) Swan of Garland, TX, Fred (Jane) Swan of Conway, AR, Helen (Rodney) Baker of Jackson, MO, Patricia (William) Dixon of Florissant, MO, Stevie (Celestine) Swan of Florissant, MO, Charles (Cora) Swan of Cape Girardeau, MO, Margaret (William) Bird of Cape Girardeau, MO and Althora Swan of Waxahachie, TX. Nieces and Nephews- Cosandra (Jason), Kedra (John), Latisha (Bernard), Deashia, Chelsey, Chris, Breonna, Briann, Calissa, Irvin, Garan, Josh, Faith, Anise, Danny, Trenton, Barrett and Adrian. With a host of great nieces and nephews. David truly loved all of his Uncles, Aunts, and Cousins. Along with all his friends that he made along his journey of life. David was preceded in death by his Parents and both set of Grandparents whom he loved. Visitation will be 1:00 pm to 2:00 pm on Friday, June 24, 2022 at Ford and Sons Funeral Home in Jackson, Missouri. A celebration of life will follow at 2:00 pm at the funeral home. In honor of David, everyone is asked to wear plaid shirts, jeans and cap. Masks are required. Ford Sons Funeral Home - Jackson is in charge of arrangements.

David Wayne Swan "Bud" left this world on Friday June 17, at his home in Troy, Missouri at the age of 64 years old. He was born April 14, 1958 and was the 4th child and 3rd son of the late Irvin and Marguerite Swan. He was raised in Jackson,... View Obituary & Service Information

The family of David Swan created this Life Tributes page to make it easy to share your memories.

Send flowers to the Swan family.