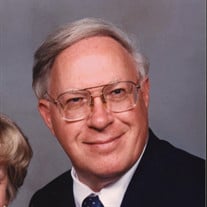 David Ernst Schaffner, 84, of Cape Girardeau, passed away Thursday, October 22, 2020 at Southeast Hospital. He was born in Jefferson City, Missouri August 6, 1936 to Earl J.F. and Hedwig Engelbrecht Schaffner. David was a graduate of Webster Groves High School. He attended Southeast Missouri State College, where he met his future wife of 62 years, Barbara Ann Blattner Schaffner. He graduated from Bethel College in McKenzie, Tennessee in 1969. He worked for Brown Shoe Company at locations in Missouri and Tennessee. He worked at Jim Wilson Company in Cape Girardeau from 1970 until his retirement in 2005. He was active in church, serving on church councils, as church president and teaching Sunday School at Evangelical UCC Church in Cape Girardeau. He served as Pastor of St. John’s UCC Church in Fruitland from 1992 to 2014. He continued to serve as interim pastor in many churches throughout the region. He was president of the local morning optimist from 1988-1990. In the state organization he served as optimist club lieutenant governor from 1989-1990. In retirement, he remained active as a volunteer with the Cape Girardeau Senior Center, delivering meals on wheels. Survivors include his wife, Barbara Schaffner; brother, Jim Schaffner; son, Steve (Linda) Schaffner; daughter, Helen (Rick) Cason; grandchildren, Stephanie (Todd) French, Dr. Charlotte (Michael) Cervantes, Eddie Cason and great-granddaughter, Emma French. He was preceded in death by his parents and a son, David Blake Schaffner. There will be a private graveside service at Cape County Memorial Park Cemetery with Rev. Jeff Estes officiating. A celebration of life will be held at a later date when the pandemic has passed, and the flowers start to bloom. The family appreciates memorial contributions to Maple Avenue United Methodist Church Building Fund or other mission needs.

The family of David Ernst Schaffner created this Life Tributes page to make it easy to share your memories.

Send flowers to the Schaffner family.