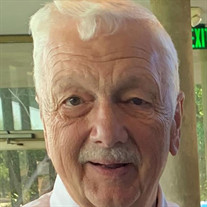 Dr. David S. Johnson passed away peacefully in his sleep at Big Cedar Resort in Ridgedale, MO on Monday, January 17. He was born October 15, 1945 in Franklin Park, Il. He grew up in Melrose Park Il. In 1969, he married Florence Loeffler in Columbus, OH. They celebrated their 52nd wedding anniversary on July 5th. He was Dad to Dr. Colleen Moore (Mark) of Springfield, IL and Philip (Lori Lester) of Plano, TX. He was DavePa to Nolan and Kinley Johnson and Stuart and Elan Moore. Upon graduation from the University of Illinois Dental School, he joined he US Army. He served in Augusta, GA and subsequently received his specialty training at University of Missouri-Kansas City in Pediatric Dentistry. He then finished his Army career with a three year assignment in Augsburg, Germany. He settled his family in Cape Girardeau, MO in 1979. He was the first pediatric dentist between St. Louis and Memphis. During his career, he served as a Trustee for the Missouri Dental Association. He was honored as the Missouri Dentist of the Year in 1997. He was also a member of the Cape Dental Study Club, the Southeast District Dental Society and the International College of Dentists. He was caring and compassionate towards his patients and especially loved the 4-year olds. An avid pilot, he was never happier than he was when he was in the clouds. He served his community as a member of the Cape Noon Optimist Club and will be missed at Chili Day this year. He was an active member of the Cape Girardeau Country Club. He will be greatly missed by the Tuesday Golf League, his golfing partner and longtime fishing buddy, Dr. Bob Fox, as well as his Tuesday poker group and the Wednesday dinner group. He was always proud of his beloved Chicago sports teams, the Bears, the Cubs and the Blackhawks. He will always be remembered for his wild and colorful ties. He was preceded in death by his parents, Stuart and Rita Johnson, and his mother-in-law, Laurene Loeffler. Per his Irish grandmother, Lall Nolan, this joyous sendoff will begin with visitation on Thursday, January 20th from 4:00-7:00 pm at St. Vincent de Paul Catholic Church in Cape Girardeau, MO. The funeral Mass will follow on Friday, January 21st at 10:00 am. In lieu of flowers, the family requests donations to Catholic Charities - LifeHouse Cape (CCSOMO; 231 Main Street; Cape Girardeau, MO 63701) or St. Vincent de Paul Parish, Cape Girardeau.

Dr. David S. Johnson passed away peacefully in his sleep at Big Cedar Resort in Ridgedale, MO on Monday, January 17. He was born October 15, 1945 in Franklin Park, Il. He grew up in Melrose Park Il. In 1969, he married Florence Loeffler in Columbus,... View Obituary & Service Information

The family of David Johnson created this Life Tributes page to make it easy to share your memories.

Dr. David S. Johnson passed away peacefully in his sleep at Big...

Send flowers to the Johnson family.