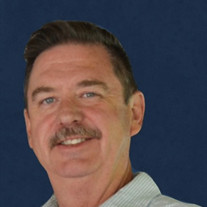 David L. Hulcy, 60, of Cape Girardeau, passed away unexpectedly Thursday, September 3, 2020 at home. He was born June 26, 1960, at Offutt AFB, Nebraska, to the late Zane C. Hulcy and Sharon B. Hulcy Barrows. His childhood as the son of a Marine was spent traveling and living with the family at various military stations in Nebraska, Alaska, California, and North Carolina, returning to Cape Girardeau in 1970. He was a 1978 graduate of Cape Girardeau Central High School and a 1983 graduate of Southeast Missouri State University where he formed countless lifelong friendships he treasured. After graduation he worked briefly at Sohn's Menswear and then started a career sales position at Paramount Liquor Company, later Southern Glazer, spanning more than 35 years. He took care of his customers all week, while forming a tight partnership with his fellow long term co-workers that made him look forward to the banter and camaraderie of the workweek, and made the Cape house of the company one of the most successful in Missouri. David married Laura J. Joyce August 14, 1987 in Jackson, Missouri. David was a voracious reader of fiction and non-fiction, a strong audiophile and movie buff, making him difficult to beat in a game of Trivial Pursuit. He would humbly state after a victory that it was 'just useless knowledge' yet friends frequently called with questions that he could answer without blinking. He loved his girls and took to fatherhood quickly, taking the morning rush role on in stride, driving his girls to school, and getting home in time to see every soccer and volleyball game from first grade through senior year. He enjoyed family gatherings, cooking for the holidays, and looked forward to the annual Florida vacation to spend more time with his daughters. Loving survivors include his wife; daughters Zane Elizabeth and Gabrielle Finley Hulcy of Creve Couer; aunt, Margaret Spear of Cape Girardeau; uncle, Joe (Debbie) Hulcy of Red Oak, Texas; brother-in-law Tony Wiggins of Cape Girardeau; sisters-in-law Karen Mattingly of Jackson; Kathy Joyce of Jackson; Rita (Randy) Johnson of Eureka; Melissa (Chip) Haring of St. Peters; nephews Robert (Terri) Joyce of Lake, MI; Scott (Heather) Mattingly of San Antonio, TX; Chris Mattingly of St. Louis; Brett Mattingly of Jackson; Casey(Ashleigh) Johnson of St. Louis; and J.P. Haring of St. Peters; nieces Madalyn Wiggins of Cape Girardeau; Jennifer (Scott) Shrum of Kevil, KY; Bailey (Jacob) Bagot of Essex, MO, Allison Johnson, Suzanne Johnson and Laine Johnson of St. Louis, Annesley Haring, Ella Haring and Jillian Haring of St. Peters; and many cousins. He is also survived by his best fur buddy, Kipp. Visitation will be from 4 to 8 p.m. Friday at Ford and Sons Mount Auburn Funeral Home, with a memorial service at 10 a.m. Saturday at the funeral home. Memorial contributions may be given to St. Jude Children's Research Hospital and the Humane Society of Southeast Missouri.

David L. Hulcy, 60, of Cape Girardeau, passed away unexpectedly Thursday, September 3, 2020 at home. He was born June 26, 1960, at Offutt AFB, Nebraska, to the late Zane C. Hulcy and Sharon B. Hulcy Barrows. His childhood as the son of a Marine... View Obituary & Service Information

The family of David L. Hulcy created this Life Tributes page to make it easy to share your memories.

Send flowers to the Hulcy family.