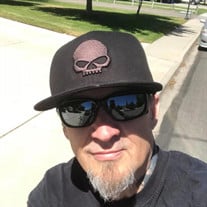 David Joseph Butler, 56, of Cape Girardeau, passed away Wednesday, August 12, 2020 at Southeast Hospital. He was born June 14, 1964 in Jacksonville, North Carolina to Donald and Derenda Hurst Butler. David was a retired truck driver, who loved driving the open road in his truck or on his Harley. To say he was a motorcycle enthusiast is an understatement. And of course, he enjoyed surfing the waves of the Pacific Ocean, cheering on his Alabama Crimson Tide, and celebrating life with a cigar and shot of bourbon. From his Mama: David, my first born, was named after both grandfathers. He was proud to carry both of their names and was a lot like both. He was like Papa Joe in the fact that he was very stubborn and strict. He was like Grandpa Butler who was a man of many dreams and kindness. David was a good father and loved his grandchildren with great pride. David was a wonderful husband to his wife, Elisabeth. As his mother I was blessed the day he was born. I will miss you, my sweet son. When you see Daddy on the other side, give him a kiss from your Mama. Rest in peace my wonderful son. Loving survivors include his mother, Derenda Butler of Cape Girardeau; wife, Elisabeth (Rossman) Butler of Cape Girardeau; daughter, Ashley (Eric) Bennett of Jackson; daughter, Kyra (Abraham) Juarez of Anaheim, California; daughter, Bobbi Martin of Sikeston; sisters, Dorinda (Timothy) Neumier of Columbia, Missouri and Donna (Jerry) Young of Broken Arrow, Oklahoma; grandchildren, Breydon, Arianna, Bella, Peighton, Liam, Tristyn, Sage and Jaxon. He was preceded in death by his father, Donald Butler. A memorial service will be held at a later date.

The family of David Joseph Butler created this Life Tributes page to make it easy to share your memories.

Send flowers to the Butler family.