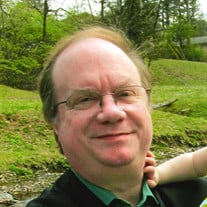 Darren Lee Davis, 60, of Cape Girardeau, Missouri passed away unexpectantly on Tuesday, April 6, 2021. He was born February 20, 1961 in St. Louis County to Arthur and Melba Glenn Davis. He graduated from Perryville High School and attended Southeast Missouri State University majoring in art. He married Debbie Bisher on December 2, 1989. They divorced in December 2018, but remained friends. Two children were born in their union - Ryan and Christine. He worked at Powers Amoco, AutoZone, was a framer at Hobby Lobby, and most recently employed at Bi State Southern. However, his most passionate and rewarding lifetime career was that as a magician and balloon sculptor. He was self taught beginning in grade school and began performing at birthday parties while attending high school. He performed at many, many birthday parties, Christmas parties, and community charity events. He performed at family night at Culvers in Cape Girardeau every Tuesday night for many years. His hobbies included movies, theatre, building and collecting science fiction models and memorabilia. Halloween was his favorite holiday and he enjoyed designing and setting up a haunted house at St. Mary Grade School every year his children attended school there. His children and grandchildren were his pride and joy. He was an only child and survived by his daughter, Christine (Christopher) Hinman of Cape Girardeau; son, Ryan (Whittany Clubb) Davis of Cape Girardeau; two grandchildren, Lilly Hinman and Christopher Hinman II. He was preceded in death by his parents and grandparents. Visitation will be 4:00 pm to 8:00 pm on Sunday, April 11, 2021 at Ford and Sons Mt. Auburn Chapel in Cape Girardeau. Funeral service will be at 10:00 am Monday, April 12, 2021 at Ford and Sons Mt. Auburn Chapel in Cape Girardeau. Burial will be at Cape County Memorial Park Cemetery in Cape Girardeau at a later date. He had no life insurance, so the family is requesting that memorial contributions be made to Ford and Sons Funeral Home, 1001 N. Mt. Auburn Road, Cape Girardeau, MO 63701 or to the Go Fund Me page that has been set up in his name. Online condolences may be made at www.fordandsonsfuneralhome.com. Ford and Sons Funeral Home - Mt. Auburn is in charge of arrangements.

The family of Darren Lee Davis created this Life Tributes page to make it easy to share your memories.