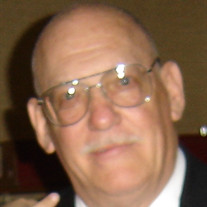 Darrell N. Simmons, 86, of Cape Girardeau, Missouri died Saturday, January 22, 2022 at Saint Francis Medical Center. He was born September 26, 1935 in St. Louis County to Omer and Minnie Sheets Simmons. The family moved to Portageville, Missouri in 1945 and returned to St. Louis his senior year of high school. He was a graduate of McKinley High School in St. Louis and attended Southeast Missouri State University. He and Anna Jean Lamb were married April 4, 1956 at Winnebago Presbyterian Church in St. Louis. They were married for 65 years. Darrell served in the National Guard and then in the Air Force from 1955 to 1959. He worked in the insurance industry for over 50 years and was the owner of Simmons and Simmons Insurance Agency, Inc. in Cape Girardeau with his son and daughter. He was a member of St. Andrew Lutheran Church and Harold O. Grauel Masonic Lodge #672. Darrell loved and enjoyed spending time with his family. He participated in all sports. He especially enjoyed a good game of golf with family and friends. Darrell was a lifelong Cardinal fan and was a member of the Knothole Gang. He enjoyed attending and watching the games on TV. Survivors include his wife, Anna Simmons of Cape Girardeau; son, Darrell (Carrie) Simmons, II of St. Louis; daughter, Kathy (Jon) Paar of St. Peters, Missouri; brother, Roger Simmons of Tennessee; sister, Gail (Hal) Mahar of Nashua, New Hampshire; and five grandchildren, Kara, Erika, Whitney, Taylor and Grant. He was preceded in death by his parents; four sisters, infant, Wilma Joy Simmons, Gloria Duffield, Joanne Frye and Eve McVicker. A memorial interment service will be at a later date at Jefferson Barracks National Cemetery in St. Louis. Memorial contributions may be given to St. Jude Children's Research Hospital. The family would like to give special thanks to the staff of Saint Francis Medical Center, especially, Dr. Meera Krishnan. Also a special thank you to staff R.N. John at Southeast Hospital for his kindness and excellent care of our beloved Darrell.

The family of Darrell N. Simmons created this Life Tributes page to make it easy to share your memories.

Send flowers to the Simmons family.