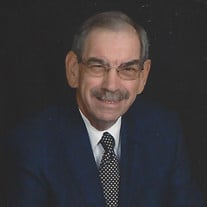 Daniel Joseph "Joe" McKeon, 80, of Cape Girardeau, Missouri died Saturday, November 28, 2020 at Saint Francis Medical Center. He was born July 1, 1940 in Davenport, Iowa to Dan and Leona McKeon. He married Barbara Kulish on July 2,1966 in Cedar Rapids, Iowa. She survives. Joe served in the Army from 1963-1965. He attended St. Ambrose College in Iowa and received a Bachelor of Science degree from Southeast Missouri State University. He was a member of St. Vincent de Paul Parish. Surrvivors include his wife, Barb; children, Tim (Sherri) of Locke, New York, Betsy (Mike) Anders of Cape Girardeau, Matt (Eileen) of St. Charles, Missouri; brothers, Jim (Jackie) of Longmeadow, Massachusetts; Jack of Davenport, Iowa and Pat (Packy) of Wheatland, Iowa; sister-in-law, Judy (Jim) Hathaway of Vienna, Virginia; grandchildren, Josh, Ryan, Cody, Katie, Luke, Daniel, Christopher, Jonathon, Zachary, Xavier, Madeleine, Adelaide, Gwendolyn, Vivian, Liam, Gavin, and Keelan; seven great-grandchildren and numerous nieces and nephews. He was preceded in death by parents; daughter, Katie, sister-in-law, Elaine McKeon, and a brother Donald. Joe and Barb moved to Cape in 1969. He worked for the R.T. French Company for 14 years then joined Northwestern Mutual Life where he worked for 43 years, retiring in 2012. He was one of the founding members of the Notre Dame High School Booster Club and a Bob Miller Award recipient. He was a past member of the Boy Scout Executive Council for Southeast Missouri and then St. Louis. He was awarded the Silver Beaver Award for his service to Scouting. He was past board member of the Southeast Hospital Foundation. He held multiple positions in Life Underwriters before retiring. He was past Lt. Governor of Rotary International and a current member Cape Girardeau Rotary. He is a Paul Harris Fellow. Joe was a current member of the Cape Country Club where he was an avid golfer. He was most proud of his hole-in-one in 2018. He was a member of the SEMO Seniors Golf Association. He made Cursillo #1 in Perryville. He was a board member of Teens Encounter Christ and was very active in the retreat serving as a Director and Wheat Team Director. But his favorite role was as head cook for many, many retreats. He and Barb became Benedectine Oblates of St. Meinrad Archabbey. He was a friend of Bill W. for 47 years. He was an avid hunter and loved pheasant season in Iowa where he hunted with his brothers, nephews, son and grandson. He loved fishing throughout southern Missouri and southern Illinois with many friends. He was famous for his homemade bread and rolls and kettle beef. He added baking cookies and other treats after retirement. He was an avid sports fan and loved the Cardinals, Iowa Hawkeyes, Duke Blue Devils, Notre Dame Fighting Irish and the Notre Dame High School Bulldogs! Following in his fathers footsteps, he was a passionate gardener. He started a Thursday evening Rosary group in 2001 that continues today. Friends may call from 9-11 am Wednesday, December 2, 2020 at St. Vincent de Paul Church. Funeral mass will follow at 11 am at St. Vincent de Paul Church with the Rev. Rick Jones officiating. Burial will be at St. Mary Cemetery. Full military rites will be provided by Missouri Honors Team. The family would like to thank the St. Francis Medical Center COVID unit staff and ask that you keep them in your prayers. In lieu of flowers the family asks for memorial contributions to St. Vincent de Paul Catholic Church, Notre Dame High School, and Birthright of Cape Girardeau.

The family of Daniel Joseph "Joe" McKeon created this Life Tributes page to make it easy to share your memories.

Send flowers to the McKeon family.