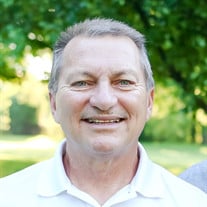 Daniel Wayne Driskell, 62, of Cape Girardeau, Missouri passed away Friday, November 20, 2020 at Southeast Hospital after battling esophageal cancer. He was born November 25, 1957 in Chaffee, Missouri to Isaac H. and Katie Elizabeth (Mott) Driskell. He married his high school sweetheart, Gerry Seib, on October 15, 1977 at Old McKendree Chapel in Jackson, Missouri. Dan began working in the concrete business at age 14 and helped establish Gerdan Slipforming in 1990. Dan was passionate about his work and was instrumental in improving the industry. He was well respected for his work ethic, honesty, and integrity. Dan was very involved in and cared deeply about serving his community. He was a member of La Croix United Methodist Church, where he was a previous member of Church council. He was a past board member of the Industrial Development Authority, Bank of Missouri, Southeast Missouri Regional Port Authority, Associated General Contractors of Missouri, and the Cape Girardeau Chamber of Commerce. He was also a current member of the Lions Club. Dan enjoyed traveling, Disney World, sweets, a good glass of wine, and Cardinal's baseball. He most enjoyed being Papa to his four grandchildren. Dan will be remembered for his contagious laugh, generous spirit, and love of family. He was preceded in death by his parents. Survivors include his wife, Gerry Driskell, of Cape Girardeau; two sons, Jeremy (Elizabeth) Driskell of Bloomington, Illinois and Blake (Dana) Driskell of Jackson, Missouri; four grandchildren, Liam and Calista Driskell both of Bloomington, Illinois and Caleb and Anna Grace Driskell both of Jackson; a brother Isaac Larry (Rebecca) Driskell of Cape Girardeau; two sisters, Frances K. (Gene) Farrow of Millersville, Missouri and Phyllis F. (Wesley Jr.) Farrow of Cape Girardeau. A private graveside service will be Tuesday, November 24, 2020 at Cape County Memorial Park Cemetery in Cape Girardeau with the Rev. Ron Watts officiating. A public event will be held at a later date. Memorial contributions may be given to The Salvation Army, 701 Good Hope Street, Cape Girardeau, MO 63703 or Alzheimer's Association Greater Missouri, 9370 Olive Blvd., St. Louis, MO 63132-3214. Online condolences may be made at www.fordandsonsfuneralhome.com. Ford and Sons Funeral Home- Mt. Auburn is in charge of arrangements.

The family of Daniel Driskell created this Life Tributes page to make it easy to share your memories.

Send flowers to the Driskell family.