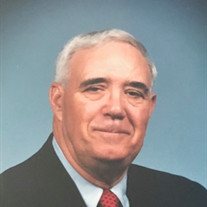 Dale O. Spell, a resident of Cape Girardeau, Missouri, passed away peacefully at Saint Francis Medical Center on Tuesday July 13, 2021. He was born July 15, 1937, in Goodman, Mississippi, to L.U. Spell and Christine Burrell Spell. He spent his childhood moving to numerous states where his Dad helped complete the massive interstate building programs during the 1960's and 1970's. Dale's family moved to Cape Girardeau in 1955, where he graduated from Central High School in 1956. He attended Southeast Missouri State College from 1956-1958, studying Civil Engineering. He married Mary Louise Welch on August 16, 1958, at Maple Avenue United Methodist Church. Dale was employed as a heavy equipment diesel master mechanic for R. B. Potashnick Co., and later Delta Asphalt, building roads and dams across the central United States until returning to Cape Girardeau in 1974. Dale was an active member of Maple United Methodist Church where he was a founding member of the famous J.O.Y. Sunday School class. He served many years as an usher, chairman of the trustees, and the finance committee. He assisted with many church activities and bereavement dinners. Dale served his community as a volunteer at Saint Francis Medical Center, Meals on Wheels, and Cape Girardeau Chamber of Commerce Beautification Committee where he assisted Melvin Gately with his efforts to plant to roses throughout the city. When he was not working or volunteering, he enjoyed hunting and fishing, and spending time with his family and dear friends. He is survived by his wife, Mary L. Spell, and daughters Stacy Jansen (Jim) of Brentwood, MO., Chris Hulsey (Dave) of Eureka, MO., and Beth Friedrich (Scott) of Perkins, MO. His daughters would like to note he was the best girl dad ever. He is also survived by his sister, Judy Fischer (Dennis) of Villa Ridge, MO, and nieces and nephew, the Reverend Alecia Fischer, Carrie (Allen) Pack, and Keith (Jill) Fischer, and Sara Sprouse (Matt). Poppy Dale was adored by his ten grandchildren: Nick Jansen (Katie), Carly Jansen, Jon Blank (Mila), Adam Hulsey, Ellen Hulsey, Hanna Hulsey Nettesheim (Jay), Paige Hulsey, Will Friedrich (Claudia), Kyle Friedrich, and Stephen Dowdy (Noah). He also was great-grandfather to Alleyson and Loralei Hulsey, Logan Blank, Brooklyn and Asher Nettesheim, Ryker Friedrich, and Freya Jansen. Dale was preceded in death by parents, his older brother Kyle I. Spell, and his youngest and much-loved daughter Jennifer Spell Dowdy. Visitation will be 10:00 am to 11:00 am Friday at Ford and Sons Mount Auburn Funeral Home in Cape Girardeau. His Celebration of Life will follow at 11:00 am Friday at the funeral home, led by the Reverend Jeff Estes, Pastor of Maple United Methodist Church. The family requests in lieu of flowers, memorial contributions be made to Maple United Methodist Church. Online condolences may be made at www.fordandsonsfuneralhome.com.

The family of Dale O. Spell created this Life Tributes page to make it easy to share your memories.

Send flowers to the Spell family.