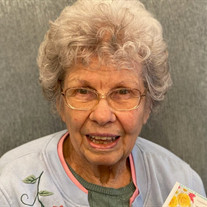 Coleen Frances Smith, 86, of Jackson, Missouri passed away early morning August 27th, 2021. Coleen was born January 17th, 1935 in Cape Girardeau to Emil and Hermina Schwepker Simpher. Coleen had a smile that was equivalent to a hug, which she gave freely to everyone she met. People often said she never met a stranger. Widowed in her early twenties, she was a strong and dedicated mother to her two children, Chuck Wolters, who was two years old at the time and Charlotte Wolters was six years old. In 1973 Coleen and Joe W. Smith met and shared a long and loving marriage, merging the two families who are now left with wonderful memories and yet sadness for the loss of both Coleen and Joe who passed before her in 2017. She loved to dance, enjoyed feeding the birds and tending to her flower gardens. Her heart was genuine, generous and her faith in God never faltered. Survivors include two sons, Jory (Jo Ann) Smith and Chuck Wolters both of Jackson, Missouri; three daughters, Beth (Bob) Armstrong of Kansas City, Missouri, Charlotte Wolters of Washington and Brenda Proffer of Jackson, Missouri; nine grandchildren, Samantha Tidwell, Cory Woods, C.J. Wolters, Annika Wolters, Haley Armstrong, Jessica Armstrong, Laura Leigh Armstrong, Joseph Wolters and Andrew Armstrong; and five great-grandchildren. She is preceded in death by her parents; first husband; husband; one brother, Raymond "Bud" Simpher; four sister, Viola Overbeck, Lorene McDaniel, Evelyn Simpher and an infant sister. Visitation will be 10:00 am to 11:00 am Monday, August 30, 2021 at Ford and Sons Funeral Home in Jackson. Funeral service will follow at 11:00 am Monday at the funeral home with the Rev. Karen Dumey officiating. Burial will be at Russell Heights Cemetery in Jackson, Missouri. In lieu of flowers, please consider making a donation to the Alzheimer's Foundation or to the First Presbyterian Church in Jackson. Ford and Sons Funeral Home in Jackson is in charge of arrangements. Online condolences may be made at www.fordandsonsfuneralhome.com.

Coleen Frances Smith, 86, of Jackson, Missouri passed away early morning August 27th, 2021. Coleen was born January 17th, 1935 in Cape Girardeau to Emil and Hermina Schwepker Simpher. Coleen had a smile that was equivalent to a hug, which... View Obituary & Service Information

The family of Coleen Smith created this Life Tributes page to make it easy to share your memories.

Send flowers to the Smith family.