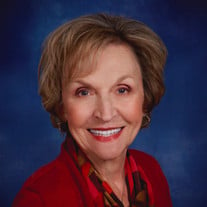 Charlotte Arlene Frueh Bess died at the Lutheran Home after an extended illness on January 7, 2022. Charlotte was born in Rolla, MO at the home of her grandparents on May 5, 1940, to Muriel Hankey and Murrell Jacob Frueh. After graduating a year early from high school Charlotte moved to Jefferson City in 1957 to study at the Central Missouri School of Radiology and Technology. Charlotte's first job as an X Ray technician was in the radiology department of Doctor's Hospital in Poplar Bluff, MO when she was just nineteen. In the fall of 1959, Charlotte stood by her car at the gas station. Her future husband, Joda Lee Bess, pulled into the gas station and remarked to himself, "I have to meet that beautiful young woman." Joda arranged for an introduction to Charlotte. In the early spring of 1960, Charlotte was offered a position at a hospital in Columbia, MO. A heavy snow fell on the day of the interview, so Joda drove Charlotte from Poplar Bluff to Columbia for the job interview. After the interview Charlotte told Joda that she had taken the position in Columbia as it was closer to her family in Rolla. Joda had four hours to contemplate his future on the drive back to Poplar Bluff. When they arrived in Poplar Bluff, Joda asked Charlotte to become his wife and she accepted. Joda and Charlotte were married on a beautiful autumn day at Holy Cross Church in Poplar Bluff, Missouri on October 1, 1960. Joda gave Charlotte an engagement ring set with a diamond that he won in a beer sales incentive and sealed her fate as a member of the unsung heroes of the beer industry: the beer spouse. On their wedding anniversary each year, Joda would remark that October 1 was the luckiest day of his life. His family and friends knew that to be a vast understatement. Charlotte personified the adage that behind every good man there was a good woman. Charlotte was not to be underestimated. In the pre-feminist sixties, Charlotte navigated raising a family and making a home. Charlotte's family bloomed under her lavish love and care. Charlotte's talents were showcased in the love that she showered on her grandchildren. Joda and James spent each Wednesday night at Nana's house until they went to college. Late in life, Charlotte was blessed with a cherished granddaughter, Joda Grace, who shares Charlotte's sparkling blue eyes. Her grandchildren will carry Charlotte's love and wisdom throughout eternity. Charlotte was baptized and confirmed at Christ Episcopal Church in Rolla, MO. As a young newlywed, Charlotte was recruited to be a member of the altar guild at All Saints Episcopal Church in West Plains, MO. Charlotte continued that service to her God and church until her health required her to retire. For 56 years Charlotte served on the altar guilds at All Saints, West Plains; Holy Cross, Poplar Bluff and Christ Episcopal in Cape Girardeau. Charlotte was a merry and faithful friend who excelled in nurturing friendships over miles and years. She was an original member of the Flex and Tone ladies exercise class that was established in 1976. She attended class faithfully, five days a week for 42 years until her health no longer allowed. Charlotte was a member of Beta Sigma Phi sorority for 48 years, building friendships with amazing ladies in both Poplar Bluff and Cape Girardeau. Charlotte survived cancer in 1989 and was treated for Fuch's dystrophy in 2008. In 2016, Charlotte was diagnosed with Alzheimer's Disease. On the ride home from the consultation, Charlotte turned to her family and said, "God's will be done." Alzheimer's robbed Charlotte of many things, but she retained her faith, bright smile and gentle spirit throughout her long illness. Charlotte's family wishes to thank Katie, Deb, Angie, Jenifer and Tina at Chateau Girardeau who cared for Charlotte when she was separated from her family during the 2020 Covid lockdown. Additional thanks go to the staff of the Lutheran Home Unit 400 who cared for Charlotte in the last year of her life. Crown Hospice attended tenderly to Charlotte's final days. Jenifer and Wendy, you gave grace and dignity to Charlotte's last year and she loved you as her own daughters. Nurses are the backbone of our health care and we are thankful for the many kindnesses shown to Charlotte during her illness. Charlotte is survived by her two children, Kathy (Keith) Holloway and David (Laura) Bess of Cape Girardeau; a brother, Robert (Martha) Frueh of Rolla, MO and three grandchildren, Joda Keith Holloway of St. Louis, MO; James (Jessica) Holloway of Ballwin, MO; and Joda Grace Bess of Cape Girardeau, MO. Charlotte was preceded in death by her husband of 49 years, Joda Lee Bess, and by her parents, Muriel and Murrell Frueh. Friends may call at Ford and Sons on Mt. Auburn in Cape Girardeau from 4 to 6 PM on Friday, January 14, 2022. A memorial service will be held at Christ Episcopal Church at 10 AM on Saturday, January 15, 2022 with the Rev. Annette Joseph officiating. In lieu of flowers, the family requests that you support Christ Episcopal Church, Trinity Lutheran School and Notre Dame Regional High School or the Alzheimer's Association. Ford and Sons Funeral Home is in charge of the arrangements.

Charlotte Arlene Frueh Bess died at the Lutheran Home after an extended illness on January 7, 2022. Charlotte was born in Rolla, MO at the home of her grandparents on May 5, 1940, to Muriel Hankey and Murrell Jacob Frueh. After graduating a... View Obituary & Service Information

The family of Charlotte Bess created this Life Tributes page to make it easy to share your memories.

Charlotte Arlene Frueh Bess died at the Lutheran Home after an...

Send flowers to the Bess family.