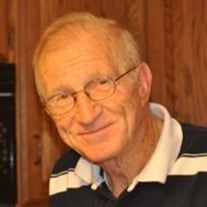 Charles ‘Charlie’ Hampton Thurman, 88, of Cape Girardeau passed away on March 26, 2022. Charlie was born August 14, 1933, in McRae, Arkansas to Jim (Holifield) and Claudia (Rogers) Thurman. He married June F. McAllister on September 5, 1954; they were married for 62 years until June’s death in 2017. She was his support, motivation and compass; everything Charlie accomplished, he accomplished with June. Together they raised three daughters, Debbie, Cindy, and Margaret in Louisiana, Iowa and Missouri. He grew up the youngest of ten siblings in the small town of McRae, Arkansas, a heritage that deeply shaped his work ethic and unique metaphors. He received his Electrical Engineering degree from the University of Arkansas in 1955. He spent his career with The Monsanto Company, during which he held many positions, including electrical engineer, plant manager and Director of Manufacturing, serving in Luling, Louisiana, Muscatine, Iowa and St. Louis, Missouri. He retired to Cape Girardeau, Missouri in 1989 to be near his family. Charlie was a vibrant presence, making an impact on those around him by kindly and generously knowing and encouraging them – his family, church community, co-workers and neighbors. Many were touched by his spiritual investment across multiple generations, including a long list of ‘adoptive’ family members. He was known by many names: ‘Buddy’, ’Hot’, ’Bruz’, ‘Pap’ or ‘Mr. Charlie’. In his later years, he deeply cherished the Senior Adults at Cape Bible Chapel. Charlie loved the outdoors and spent his retirement cultivating and maintaining his property on his Ford tractor, refinishing furniture, fishing, bird watching and quail hunting. He was preceded in death by his father and mother, nine siblings – Vernon, Hilton, Herman, Geraldine, Margaret, Elizabeth, Hugh, Erma Lee, and Betty Jean - and his wife, June. He is survived by his three daughters and sons-in-law - Debbie and Larry Young (Cape Girardeau), Cindy and Gary Olson (Cape Girardeau) and Margaret and Jim Stanzell (Tupelo, Mississippi), eleven grandchildren and their families – Lauren Thomas (Joe), Andy Young (Kristie), Krista Weeks (Peter), Beth Renfrow (Clint), David Olson, Stephen McKinney, Jon Young (Natalie), Bethany Olson, JP Stanzell, Ben Stanzell and Maddie Stanzell, and eleven great-grandchildren (and expecting another). Visitation will be held at Cape Bible Chapel, 2911 Kage Road, on Wednesday, March 30, 2022, at 10am, with service to follow at 1pm. Burial will follow at Cape County Memorial Park Cemetery. Memorials may be sent to Cape Bible Chapel or Maranatha Bible & Missionary Conference, 4759 Lake Harbor Road, Muskegon, Michigan, 49441.

The family of Charles "Charlie" Hampton Thurman created this Life Tributes page to make it easy to share your memories.

Send flowers to the Thurman family.