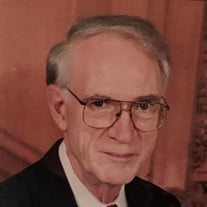 Charles Gary Stalon, 90, of Cape Girardeau, died Sunday, June 28, 2020, at Chateau Girardeau in Cape Girardeau. Charles was born in Cape Girardeau on October 26, 1929, the son of Charles Douglas Stalon and Lucy Idell Row Stalon (1911-1933). He lived in Red Star with his maternal grandparents Vallie and Charles Row. He had fond memories of growing up with his cousins, Paul Norvell and Earl Don Nanna, and numerous aunts and uncles. After graduating Cape Central High School he got a job as a tug boat deck hand. He worked on the Alton Zephyr and the Emory T pushing barges up and down the Mississippi River. He joined the Navy in 1949. He trained as a radio operator and served aboard the U.S.S. Otterstetter. He married Marie Allene Hitt at the United Methodist Parsonage in Benton on March 15, 1952. He and Marie moved to Ohio in 1954 where Charles worked for TWA Airlines as a radio operator while going to college. He received a Bachelor of Arts from Butler University in 1959, a Master of Science from Purdue University in 1963, and a Ph.D. from Purdue University in 1966. Charles was an associate professor of Economics at Southern Illinois University until 1977 when he was appointed to the Illinois Commerce Commission by Governor James Thompson. He served in that capacity until 1984 when he was appointed by President Ronald Reagan to serve as commissioner on the Federal Energy Regulatory Commission. In 1991 he joined the Institute of Public Utilities at Michigan State University serving as its director. Charles and Marie chose to return to Cape Girardeau in 1994 to live closer to family. He continued to consult on energy regulatory matters, traveling to all parts of the world. He also served on the boards of directors for New Jersey Resources Corporation, ISO New England Inc, and Georgia Transmission Corporation. They enjoyed their final years in Cape Girardeau. Even to the end his favorite outing was to drive along the Mississippi river, hoping to see a tow boat pushing barges. He was preceded in death by his beloved wife, Marie. He is survived by two daughters, Connie Lucille (Eric) Estopinal of Houston, Texas and Donna Jean Williams of Carbondale, Illinois; three grandchildren and seven great-grandchildren, Jason Charles (Michelle) Babbitt (Leah and Claire), Kriste Elizabeth (Brian) Del Castillo (Benjamin, Eli and Brian Jr.) and Dane Marcus (Laura) Babbitt (Clara and Emily) all of Houston, Texas. A private burial will be held at Missouri Veterans Cemetery in Bloomfield, Missouri. In lieu of flowers, memorials may be given to Chateau Girardeau Foundation, Southeast Hospice, Boys and Girls Club of Southeast Missouri or a charity of choice.

The family of Charles Gary Stalon created this Life Tributes page to make it easy to share your memories.

Send flowers to the Stalon family.