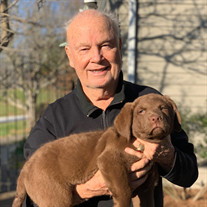 Charles Keith Jones, 84, of Cape Girardeau passed away Saturday, Oct. 30, 2021, at Southeast Hospital. He was born Oct. 16, 1937, in Cape Girardeau to the late Fonnie Wilson and Emma Jean “Teenie” Webb Jones. Keith and Marlena Miller were married Jan. 16, 1964, in Midland, Texas. He was a graduate of Cape Girardeau Central High School, where he played football. He earned his bachelor’s degree from Southeast Missouri State University and his master’s degree from the University of Tennessee. He also attended Emory University in Atlanta, Georgia. He was the geological manager in New Orleans for Mobil Oil and retired after 33 years from the Dallas office. Keith enjoyed hunting, fishing, skeet and trap shooting. He was AAA-rated National Skeet Shooting Louisiana State Champion in 1974. He also enjoyed fox hunting with the Hickory Creek Hunt Club in Texas and golfing at the Cape Girardeau Country Club and later at the Beau Chene Country Club in Mandeville, Louisiana. He is survived by his wife, Marlena of Cape Girardeau; sister, Kay Francis (Ronald) Smith; nephews, Brent Smith; Mark (Jocelyn) Smith and their children, Noah and Liam; and Scott (Treasa) Smith and their children, Nathan and Zené, all of Seattle, Washington; bonus son, J.W. Nay of Atlanta; sisters-in-law, Gloria Weston of Grand Junction, Colorado, and Nancy (Tom) Wood of Price, Utah; nephews, David (Anna) Weston of Flower Mound, Texas, Tommy Wood and Jeff (Emily) Wood; cousins and many dear friends; his beloved horse, Caesar, and Chesapeake Bay retrievers, Pick and Beau. He was preceded in death by his parents. A celebration of life will be at 11 a.m. Saturday at Ford and Sons Mount Auburn Funeral Home. Visitation will be one hour prior to the service. In lieu of flowers memorials may be given to the Humane Society of Southeast Missouri.

The family of Charles Keith Jones created this Life Tributes page to make it easy to share your memories.

Send flowers to the Jones family.