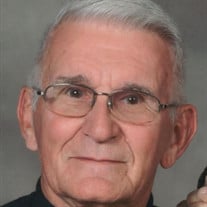 Chandler Adolph James, 83, of Bloomsdale, formerly of Marion and Cahokia, Illinois, passed away Saturday, June 18, 2022, at Memorial Hospital of Carbondale, Illinois. He was born May 31, 1939, in Brownwood, Missouri, to the late Max Adolph and Mary Kate Chandler James. Chandler was a 1957 Cape Girardeau Central High School graduate. He enlisted in the Navy in 1958 and proudly served until 1962. Most of his working life was spent as an over-the-road truck driver which he very much enjoyed. He was also known as “The Passionate Hunter.” Deer and turkey hunting, along with fishing, were his favorite things. He volunteered for 20 years and was president and chief of the fire department in Cahokia. He was a member of VFW Post 6368 in Dupo, Illinois; American Legion Post 253 in Festus, Missouri, and was a member of the Emeth Lodge No. 1030 A.F. & A.M. in Cahokia. He was a member of Immanuel Lutheran Church in Festus. He married Carol Shirrell Dougan on June 16, 2014. Chandler loved his friends and his family. If you were his friend, he was your friend forever. He loved to help people and never asked for help in return. He is survived by his wife, Carol Dougan James of Bloomsdale; sons, Kevin (Colleen) James of Maryville, Illinois; David (Lori) James of Troy, Illinois; and Max (Christy) James of East Alton, Illinois; stepsons, Chris (Paulette) Dougan of Clayton, Missouri, and Gregg (Dana) Dougan of Webster Groves, Missouri; brother, Doug (Joan) James of Fruitland; sister, Martha Howell of Jackson; seven grandchildren, Brittany (Justin) Skaggs, Austin James, Jennifer James, Mary Kate James, Holly (Adam) Gaines, Theresa James and Heather James; six stepgrandchildren, Forrest (Nicole) Dougan, Molly, Connor, Bridget and Liam Dougan, Denise Brown; five great-grandchildren and two great-stepgrandchildren. Chandler was preceded in death by his parents; a stepson, Tim Dougan; and brother-in-law, Terry Howell. Funeral service will be at 2 p.m. Monday at Ford and Sons Mount Auburn Funeral Home with Pastor Kyle Castens officiating. Visitation will be from noon until the time of service Monday. Burial will take place at a later date at Baker Cemetery in Marble Hill, Missouri.

Chandler Adolph James, 83, of Bloomsdale, formerly of Marion and Cahokia, Illinois, passed away Saturday, June 18, 2022, at Memorial Hospital of Carbondale, Illinois. He was born May 31, 1939, in Brownwood, Missouri, to the late Max Adolph and... View Obituary & Service Information

The family of Chandler Adolph James created this Life Tributes page to make it easy to share your memories.