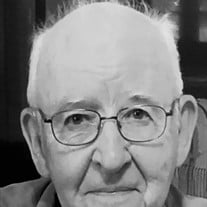 Carson "Leon" Kelley, Sr., 89, of Delta, Missouri died Monday, February 8, 2021 at his home. He was born June 27, 1931 at home in Annapolis, MO to Joseph Bradfield and Laura (White) Kelley. He and Dorothy Stoffregen were married May 4, 1953 in Arbor, MO. They had 3 sons and were married for 62 years until her death in 2015. Leon graduated from Delta High School and then served in the Air Force for 4 years where he was stationed in Japan and Korea during the Korean War. He worked for Missouri Propane Gas Co. for 12 years before opening Kelley Hardware Store in Delta, which he ran with his wife for 26 years. Leon was a well-respected community leader and businessman in Delta. In addition to supplying the town with anything you might need for your home in the hardware store, you could count on Leon to come fix a broken washing machine, air conditioner, water pipes or just about anything else. His hardware store was the unofficial seat of government for Delta where you could stop in to speak with the mayor, fire chief, little league coach, or school board member, since he was all of those at one point or another. The store and his house attached to the back was a place friends and family frequently stopped by to chat about anything and everything over a cup of coffee. He and Dorothy retired and sold the store in 1994 and later moved the Kelley Family Headquarters to a house right next to Delta Park where his grown sons and their families could often be found trading stories, working on projects, celebrating the holidays or just enjoying each other's company. He leaves behind precious memories with his sons, grandchildren and great-grandchildren who greatly respected and adored him. Survivors include sons, Carson L. (Joan) Kelley, Jr. of Cape Girardeau, Missouri, Michael W. (Tina) Kelley of Delta, and Albert Joseph "A.J." (Cindy) Kelley of Delta; grandchildren, Tasha (Daniel) Gaddy, Carson Kelley, III, Cain (Kelly) Kelley, Zachary (Alison) Kelley, and Trevor "T.J." Kelley; great-grandchildren, Connor, Jackson, Avett, Taylor Jo, Briar and Saige. He was preceded in death by his parents, siblings and his beloved wife, Dorothy. Visitation will be Wednesday, February 10, 2021 from 11:00 am- 12:00 pm at Ford and Sons Mt. Auburn Chapel. Funeral service will follow at noon. Memorial contributions may be given to a charity of choice. Ford and Sons Funeral Home- Mt. Auburn is in charge of arrangements.

The family of Carson Leon Kelley created this Life Tributes page to make it easy to share your memories.

Send flowers to the Kelley family.