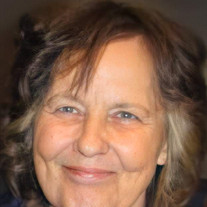 Carolyn S. Thomas, 65, of Benton, Missouri died Saturday, September 25, 2021. She was born August 28, 1956 in Fort Gibson, Oklahoma to Jessee Gray and Jewell Berkley. She and Jon Thomas were married at Sikeston Missouri on August, 23, 2001. He preceded her in death. She was a member of Unity Baptist Church. She collected guns and she loved all of her grandkids very much. Survivors include four sons, Donnie O' Hara of Benton, Reuben (Meghan) Smith of Marquand, Missouri, Carlton (Cheyenne) Hays of Benton, Missouri, and Chuck (Jessica) Hays of Grand Tower, Illinois; four daughters, Tonya (Joe) Sanchez of Benton, Missouri, Velma Barnett of Bertrand, Missouri, Carla (Fred) Henning of Benton, Missouri, and Sylvia Green of Sikeston, Missouri; 27 grandchildren, and 11 great-grandchildren. She was preceded in death by her parents, seven brothers, and three sisters. Services will be at a later date. Online condolences may be made at www.fordandsonsfuneralhome.com. Ford and Sons Funeral Home - Mt. Auburn is in charge of arrangements.

The family of Carolyn Thomas created this Life Tributes page to make it easy to share your memories.

Send flowers to the Thomas family.