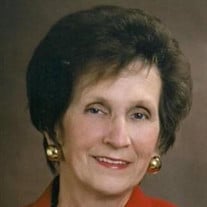 Carole Sue Dalton Rhodes surrounded by her family went to her heavenly home on March 10, 2022 after nearly a three-year battle with kidney disease. She was born to Patrick Louis and Audrey Virginia Bess Ryan on December 29, 1937 at St. Louis City Hospital. As an infant, she was adopted by Melvin Augusta and Cora Ellen Covington Dalton residing in Leadington, Missouri. Carole graduated from Esther High School in 1955. After high school, she received an art scholarship from Flat River Junior College, now Mineral Area College. Due to her father's death the previous year, she declined the scholarship to work to support herself and her mother. These early years taught her the value of hard work, respect of money, and, most of all, love of family. She and her late husband Peewee Rhodes would instill these same core values in their children. After what was only going to be "one date," she married Vernon "Peewee" Rhodes on September 26, 1959 in Esther, Missouri. They were married almost 52 years when Peewee passed away in 2011. Peewee and Carole both joked, saying they married each other for their money. They had $150 between them, $50 of which was a wedding gift from Peewee's father. Carole was mostly known as a wife and mother, but shortly after moving to Cape she worked for the City of Cape in the tax office and later joined Peewee at the business they shared, the Plaza Car Wash, now Plaza Tire Service. She took the role of bookkeeper until the business could afford to hire someone for the position. She went on to serve as an officer of the company, supporting her husband in building a business that now operates 70 tire stores and employs over 600 people. Carole bowled in a league for over 50 years, was active in a sorority, and was a talented artist. Although she didn't like the water, Carole spent most of her summer weekends at the family house on Kentucky Lake. Over the last 32 years, she hosted many friends and family in that same lake house. In 2017, for her 80th birthday, she treated the entire family to a vacation in Ireland. Seventeen travelers, from two to 80 years old made the trip of a lifetime. Her family was the most important part of her life. Lovingly known as Mamoo, Moo or Grandma by her Grandchildren or the Great Grand Moo by her Great Grandchildren, she attended every birth and was present at sporting events, dance recitals, and any event she was asked to attend by a grandchild. She was always up for a meal out with family or friends. A few weeks ago, she returned to the home that she and Peewee built nearly 40 years ago now owned by her daughter and son-in-law to spend the final few weeks of her life. While no one would call the last few weeks peaceful, we know she truly enjoyed the friends and family visiting, the evening meals, and the kids and animals in and on her bed. This was no doubt her happy place. She was gracious, dignified, and a bit strong willed. To be loved by her was to be truly blessed. Carole will be desperately missed by all those that she's left behind: daughter Kelly (Kerry) Holloway, of Cape Girardeau; sons, Mark Rhodes and Scott (Samantha) Rhodes, both of Cape Girardeau. Grandchildren: Ryun (Kate) Holloway, Kelsey (Andrew) Krahl, Casey Holloway, Samuel Rhodes, Annabelle Rhodes, Madelyn Rhodes, and Addison Rhodes all of Cape Girardeau; LCPL Zachary Rhodes, USMC, Iwakuni, Japan. Great Grand Children: Jack Holloway, Vivienne and Everett Krahl. Carole is also survived by a sister, Sally (Ross) Greco of Blue Springs, MO; a brother-in-law, Edwin "Pete" (Carol) Rhodes of Cape Girardeau, MO; a sister-in-law, Evelyn (JL) Seal of Farmington, MO and many nieces and nephews. She was preceded in death by her parents, husband, sisters, Patsy Whoprey, Joan (Gordon) Aldridge; brothers Johnny Dalton, Sammy Ryan, David Ryan; in-laws, Alvin (Eileen) Rhodes, Dayton "Mac" (Dorothy) Rhodes, Vivian (John) Wampler, Marvin (Melba) Rhodes, Alamaretta Rhodes. The family is grateful for the loving care provided by Denise Egbuka and Kim Bennett for these last few years. Visitation will be Sunday March 13th in Cape from 4:00pm - 8:00pm at Ford & Sons Mt. Auburn Chapel in Cape Girardeau. A Celebration of Life service will be held on Monday March 14th at 10:00 am under the direction of Pastor Paul Short at Ford & Sons Mt Auburn Chapel. Entombment will be at Cape County Memorial Park Mausoleum following the service. In lieu of flowers, memorials can be made to Hope Childrens Home, 709 E Main St, Jackson, MO 63755 or Southeast Hospice, 10 Doctors Park, Cape Girardeau, MO 63703. Online condolences may be made at www.fordandsonsfuneralhome.com.

Carole Sue Dalton Rhodes surrounded by her family went to her heavenly home on March 10, 2022 after nearly a three-year battle with kidney disease. She was born to Patrick Louis and Audrey Virginia Bess Ryan on December 29, 1937 at St. Louis... View Obituary & Service Information

The family of Carole Sue Rhodes created this Life Tributes page to make it easy to share your memories.

Carole Sue Dalton Rhodes surrounded by her family went to her...

Send flowers to the Rhodes family.