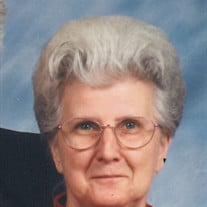 Carma Jean Stearns Newell, 86, of Jackson, passed away April 2, 2022 at her home. She was born January 1, 1936 to Ova and Nellie Hobeck Stearns. She and Charles Newell were married February 28th, 1953. Loving survivors include her husband,... View Obituary & Service Information

The family of Carma Jean Newell created this Life Tributes page to make it easy to share your memories.

Send flowers to the Newell family.