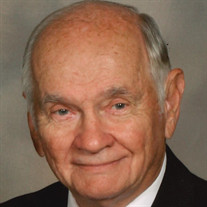 Bobby G. Roloff, 90, of Cape Girardeau, passed away Wednesday, Sept. 15, 2021. He was born January 21, 1931, in Jackson, Missouri. He was the son of Julius W. and Lucille Jones Roloff. He and the former Velma C. Nothdurft were married August 28, 1954, at Evangelical United Church of Christ in Cape Girardeau, MO. He moved from Jackson to Cape Girardeau in 1938 and has lived in Cape Girardeau ever since. He was a sales representative for the Auto Club of Missouri (AAA) in Cape Girardeau for 24 years, until he retired April 1, 1993. He was a member of Evangelical United Church of Christ and had served on the Church Council for many years and was a past president of the Church Council. Also was a Deacon of the Church, serving as co-chairperson, a member of the Union of Concerned Christians group, and belonged to the Men’s Brotherhood of the Church. Bob was confirmed at Evangelical Church of Christ in 1944. Was co-coordinator with his wife for the Church for Meals On Wheels program at Southeast Missouri Hospital for several years. He was a 67 plus year member of St. Mark’s Lodge #93 A.F. & A.M.; a 67 year member and past high priest of Wilson Chapter #75 Royal Arch Masons; a 67 year member and past Iillustrious Master of Cape Council #20 Royal and Select Masters; a 67 year member and past commander of Cape Girardeau Commandery #55 Knights Templar; Past member of St. Louis Order of Red Cross of Constantine; member of Olin S. McDaniel Council #259 Allied Masonic Degrees and a past sovereign master; a 67 year member of St. Mark’s Chapter #167 Order of the Eastern Star; member of Moolah Shrine Temple of St. Louis, and of the local Cape Shrine Club; and was on the board of directors of the Cape Girardeau Masonic Temple Association. He was also a member of Elks Lodge #639 in Cape Girardeau, Missouri, and a member of Fraternal Order of Eagles #3775 in Cape Girardeau. Survivors include his wife, a daughter, Tammy S. Popp of Cape Girardeau; a son Jerry L. Roloff of St. Louis, MO; a sister, Mrs. Irene L. Grindstaff and her husband Lloyd Lee Grindstaff of McKinney, TX. 4 grandchildren, and six great-grandchildren. He was preceded in death by his parents and son-in-law Larry Popp. Visitation will be Friday, September 17, 2021 from 4:00 to 8:00 p.m. at Ford and Sons Mt. Auburn Chapel. Masonic Service will be at 7:00 p.m. Funeral service will be Saturday, September 18, 2021 at 10:00 a.m. at the funeral home with Rev. Dan Johnson officiating. Entombment will follow at Cape County Memorial Park Mausoleum. In lieu of flowers, memorials may be sent of Christ Evangelical Church (Cape) https://cec-cape.org/ or Shriners’ Hospitals for Children - Saint Louis; https://www.shrinerschildrens.org/locatis/st-louis.

Bobby G. Roloff, 90, of Cape Girardeau, passed away Wednesday, Sept. 15, 2021. He was born January 21, 1931, in Jackson, Missouri. He was the son of Julius W. and Lucille Jones Roloff. He and the former Velma C. Nothdurft were married August... View Obituary & Service Information

The family of Bobby G. Roloff created this Life Tributes page to make it easy to share your memories.

Send flowers to the Roloff family.