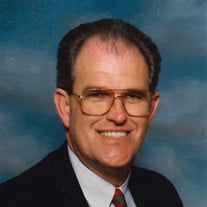 Jack McDonough, 76, of Cape Girardeau, MO, passed away peacefully on Saturday, December 04, 2021, at SoutheastHealth in Cape Girardeau, MO. Jack was born on January 21, 1945, in Morrilton, AR, to Elmo E. and Sue Crow McDonough. Shortly thereafter, the family moved to Tulsa, OK, where Jack grew up. He attended college at The University of Tulsa where he received a master's degree in business administration. Jack began his career in the automotive industry with Volkswagen in Searcy, AR, before moving to Joplin, MO, to open a Toyota dealership. He moved to Cape Girardeau, MO, in 1984 where he continued his automotive career. He met Anne Mart Sturm while in Cape Girardeau, and they were married on April 23, 1993. While Anne was the love of his life, his five grandchildren were his greatest joy. Jack cherished his time with his grandchildren and they affectionately called him "Poppo". He also enjoyed traveling, scuba diving, and was known to be a "foodie". Jack was a member of the Christian Church (Disciples of Christ). Surviving are his wife, Anne; sons Wade (Julie) of McKinney, TX, Ryan (Kelly) of Olathe, KS, and daughter Jill Sturm (Ricky Lee Clardy) of Cape County; five grandchildren: Matt, Katy, Sawyer, Aven and Samuel McDonough; his sisters-in-law Pam McDonough of Joplin, MO, and Mary Ellen Mart of Indianola, IA; and several nieces, nephews and cousins. Jack was preceded in death by his parents and three siblings-Pamela Gordon, Debbie Moore, and Rick McDonough, and a nephew, Erick McDonough. Due to Covid-19 exposure, the service will be delayed to a later date. In lieu of flowers, Jack requested that memorials be given to Abbey Road Christian Church, 2411 Abbey Road, Cape Girardeau, MO 63701.

The family of Bobby Jack McDonough created this Life Tributes page to make it easy to share your memories.

Send flowers to the McDonough family.