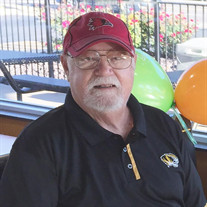 Bobby Leon Burke, 82, passed away on Friday, January 28, 2022, surrounded by members of his family at home. Bob was born in Cape Girardeau, Missouri on September 15, 1939, to Charles and Blanche Burke. Bob and Mary Jane Hoffman were married on April 1, 1958 and he began his career at Rust and Martin in Cape Girardeau as a furniture upholsterer. From there he moved to Sears in Cape Girardeau –beginning his 35 years at the company in the warehouse and eventually moving his way up to become one of the highest grossing large appliance salespersons in the entire district. Bob was known by his many friends and family for his love of collecting antiques, working in his yard, his Friday nights spent at the various Shooting Matches in the area, and his Saturday morning breakfasts at McDonald’s with his buddies. From feeding the birds in his yard to fishing in the ponds owned by his many friends, Bob kept himself busy after retirement. He especially loved spending time with his grandchildren, and he always welcomed each visit with a big smile on his face and a warm welcome in his heart. He touched the lives of so many and he will be sorely missed. Survivors include his wife of 64 years, Mary Jane Burke of Cape Girardeau. Also surviving are three daughters: Robin Burke of Missoula, Montana, Tracy Burke of Cape Girardeau, Sara Southard (Dan) also of Cape Girardeau; five grandchildren: Kelcie Miller of Cape Girardeau, Kyle Miller of Cheney, Washington, Tanner Wright of Spokane Washington, Landon and Katelyn Southard of Cape Girardeau, and two great grandchildren: Isaiah and Kaylee Miller of Cheney, Washington. He is also survived by many nieces and nephews who will certainly miss their “Uncle Bob.” He was preceded in death by his parents, his brothers Bill and Jerry Burke, his sisters Judy Scott and Charlotte Burke, and his grandson, Hunter Southard. Per Bob’s request, there will be no visitation or funeral services.

Bobby Leon Burke, 82, passed away on Friday, January 28, 2022, surrounded by members of his family at home. Bob was born in Cape Girardeau, Missouri on September 15, 1939, to Charles and Blanche Burke. Bob and Mary Jane Hoffman were married... View Obituary & Service Information

The family of Bobby Leon Burke created this Life Tributes page to make it easy to share your memories.

Send flowers to the Burke family.