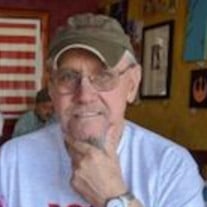 Bobbie (Bob) Harold Cook, 73, of Cape Girardeau, Missouri passed away May 7, 2022. He was born Nov. 17, 1948, in Malvern, Arkansas to the late Lloyd Jack and Eunice Juanita Baker Cook. In his early years, he was raised by his Grandma and Grandpa Baker (Blanche and Mark). During his most formidable years he was raised and loved by the late Junior and Ruth Cook. Bobbie proudly served his country in the Naval Reserves. He was a member of the Eagles, Elks, Masons, Easter Star and VFW. He worked as a signalman for Union Pacific Railroad (formerly Cotton Belt and Southern Pacific) for 22 years. Bobbie and Cathy Cato were married Sept. 16, 1975 in Cape Girardeau. He said it was the best decision he ever made. Together, they brought together the family of Jim, Shelley, and Brandon. Brian was born in 1978. Bobbie and Cathy traveled in all 50 states by motorcycle and 8 provinces of Canada. They also served together as the worthy patron and matron of the Cape Rock Chapter #60 of the Easter Star. Bobbie was an avid fisherman and hunter. He went on some big game hunts out west and passed on his love for the outdoors to all his family. He was a proud member of Big Camp Hunting Club. Survivors include his wife, Cathy, of Cape Girardeau; son, Jim (Marcy) James of Wolf Lake, IL, Shelley (Les) Dennie of Hernando, MS, Brandon (Chansi) Cook of Pine Bluff, AR, and Brian Cato Cook of Cape Girardeau; sisters, Jeannette (Norris) Williams of Redfield, AR, Barbara A. Turner of Pampa, TX, Brenda K. Lackie of Fort Worth, TX, Carol Franklin Cook of Whitehall, AR; brothers, William (Carolyn) Cook III of Junction City, KS, Ronald (Jean) Cook of Pottsville, AR, grandchildren, Andrea James of Florence, IN, Alex David James of Benton, MO, Aisha Cook of Tulsa, OK, Hanna Cook of Pine Bluff, AR, Josh Dennie and Zach Dennie of Hernando, MS; great granddaughter, Willow James, and several nieces and nephews. He was preceded in death by his parents and brother, Carl Franklin Cook. Visitation will be Monday, May 9th from 11:00 a.m. until 1:00 p.m. at Ford and Sons Mt. Auburn Chapel. Masonic service will begin at 1:00 p.m. followed by the funeral, officiated by John Casebolt. Burial will follow at Cape County Memorial Park Cemetery. There will be a celebration of life at JR'S Bar and Billiards following the service.

Bobbie (Bob) Harold Cook, 73, of Cape Girardeau, Missouri passed away May 7, 2022. He was born Nov. 17, 1948, in Malvern, Arkansas to the late Lloyd Jack and Eunice Juanita Baker Cook. In his early years, he was raised by his Grandma and Grandpa... View Obituary & Service Information

The family of Bobbie (Bob) Harold Cook created this Life Tributes page to make it easy to share your memories.

Send flowers to the Cook family.