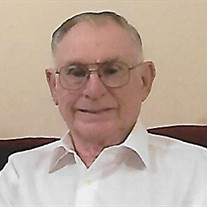 Billy Eugene Shuffler, born Dec. 27, 1929, in Forbes, North Carolina, died Saturday, Nov. 28, 2020, in Washington at the age of 90. The son of Carrick Nelson and Sallie Garland Shuffler, he was one of five children, including Charles L. "C.L." Shuffler, James "Buster" Shuffler, Hugh Shuffler and Jolene Small. In addition to his brothers and sister, others who preceded him in death were his beloved wife of 48 years, Enid Shuffler; son, Bill Shuffler; and grandson, Michael. He is survived by two children, Elinda (Kerry) Eakins of Atlanta, Georgia, and Gene (April) Shuffler of Brookfield, Missouri; daughter-in-law, Janice Shuffler of Malden, Missouri; five grandchildren, Chrissy, Derek, Joe, Trenton and Rissa; and seven great-grandchildren, Macey, Katie, Madilyn, Will, Jack, Levi and Molly. Billy's adventurous life included enlisting in the Army at the age of 18 and serving in Japan in 1947 with the U.S. Army Occupation Force as a carpenter foreman. After his service, he worked briefly in North Carolina and then started his career in Baltimore, Maryland, working for the Martin-Marietta Aircraft Company. He was soon promoted to work at Cape Canaveral with the original seven astronauts in the new NASA manned space program. Following his work with NASA, he transitioned to work on underground anti-ballistic missile projects to supervise the construction of missile silos all over the country. During his work with NASA, the astronaut program, and the ABM missile silo construction, he was introduced to four active presidents. He had many other interesting career assignments in which he worked all over the United States, as well as Saudi Arabia, Iran and New Zealand. One of the highlights of his career was his work on the Trans-Alaska Pipeline, where he was a superintendent responsible for building three pump stations along the line and received extraordinary recognition at each station. He maintained an active life, working various jobs in Missouri and Georgia until he fully retired. Funeral services will be at Ford and Sons Funeral Home, 1001 N. Mount Auburn in Cape Girardeau. Visitation will be from 5 to 8 p.m. Wednesday, December 16, 2020 and the funeral service is scheduled for 10 a.m. Thursday, December 17, 2020. Burial with full military rites by Missouri Honors Team will follow at Cape County Memorial Park Cemetery. Online condolences may be made at fordandsonsfuneralhome.com.

Billy Eugene Shuffler, born Dec. 27, 1929, in Forbes, North Carolina, died Saturday, Nov. 28, 2020, in Washington at the age of 90. The son of Carrick Nelson and Sallie Garland Shuffler, he was one of five children, including Charles L. "C.L."... View Obituary & Service Information

The family of B.E. Shuffler created this Life Tributes page to make it easy to share your memories.

Send flowers to the Shuffler family.