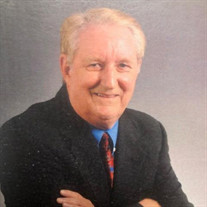 Billy Ray “Bill” Anderson, 80, – also affectionately known as “Cousin Carl” ¬– passed away December 18, 2020, following a visit with his children. He was preceded in death by his loving wife of 56 years, Elizabeth Ann (Crowell) Anderson. Bill was born December 14, 1940, near Forman, Arkansas to Eloise “Snow” and John D. Anderson. He grew up loving radio and country music. As was the custom in the ’40s, radio provided both information and entertainment, especially to farm families like the Andersons in the Red River bottoms of Oklahoma. Bill’s first paying job in radio began as a senior in high school when he worked part-time at the Dequeen, Arkansas station. His first full-time position was at KBEL in Idabel, Oklahoma. His talent earned him the Country Music DJ of the Year Award in 1961 at the Ryman Auditorium in Nashville. His long career as “Cousin Carl” started in the mid-’60s when he created the hillbilly character for a start-up radio station in Holdenville, Oklahoma. Bill did a morning show in the character’s hayseed voice and then switched to his normal professional radio voice to read the news. No one in the community even realized that Bill Anderson and Cousin Carl were one and the same. Bill briefly stepped away from radio to work in television news in Dodge City, Kansas but was soon called back to Holdenville for another decade as Cousin Carl. He also learned to fly and started a side business flying pipeline patrol checking for leaks for Kerr McGee Oil. That gig soon morphed into crop dusting and he moved to Texas where he owned and operated an agriculture spray business. However, his love of radio never waned, and he left Texas in 1977 for a stint at KDXE in Little Rock, Arkansas, before moving to Southeast Missouri in 1979. There he spent the rest of his career, first at KSIM, then KMIS, and finally fulfilled a life-long dream by starting his own station- KWKZ 106.1 in Cape Girardeau. Forever a fan of traditional country and western swing, Bill chose to focus his character show on the music and artists that he knew personally from his years in the industry. Over the next three decades, Cousin Carl became the most recognized and popular show in the Heartland, and in 2010, Bill received a coveted Addy Award for his talent. Bill worked closely for years with his daughter, Susan (aka “the Girl), on and off the air and enjoyed promoting her singing career. He retired in 2019 due to health concerns. Survivors include his children: Dianne (Mark) Mathis, Susan (Arnold) Bell, John (Mindy) Anderson; grandchildren Sydney and Chase Eubank, Kirsten (Jonathan) Holley, Cody and Taylor Anderson, Weston and Waverly Mathis; great-grandchildren Kami Eubank and Teagan Anderson; His sister, Judith Davis, brother-in-law Ray (Shelly) Crowell, nephew Michael Anderson who lived with him in recent years, niece and nephew: Lisa and John, great-niece and nephews: Natalie (Tony), John Louis and Joseph, extended family and many other friends who he regarded as family members. A small private family service is planned at Ford and Sons Funeral Home with the Rev. Eric McGruder officiating, and music conducted by Mindy Anderson. Pallbearers include Jonathan Holley, Aaron Moore, John Davis, Jack Davis, Jacob Valdivia, and J.W. Henderson. Honorary pallbearers include Ted Eftink, Jeff Sutton, Dennis Ward, Steve Decker, Dale Forbis, Rick Young, Bob Dolley, and Butch Koeppel. The family invites everyone who knew him, whether as Bill or Cuz, to join a celebration of his life being planned on Pure Country C106.1. Also, please share your memories on the C106.1 Facebook page or at www.fordandsonsfuneralhome.com In lieu of flowers, memorial contributions may be given to Safe House for Women, Inc.; Community Partnership of Southeast Missouri or Humane Society of Southeast Missouri.

The family of Bill Anderson a.k.a. Cousin Carl created this Life Tributes page to make it easy to share your memories.

Send flowers to the Anderson a.k.a. Cousin Carl family.