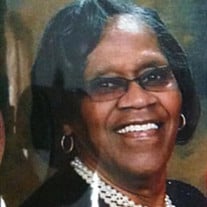 Beulah Everee Vann Perry was born to the union of Robert Mason and Hazel Shephard on May 7, 1933 in Jackson, Missouri. Her parents; one brother, Robert Mason; daughter, Debra Vann; son, Robert Vann, and grandson, Mark Anthony Vann, preceded her in death. Although segregation was still in existence, she walked about two "city blocks" to school in Jackson, Missouri and was able to get an education in a two-roomed schoolhouse near her home. She later continued her education at John S. Cobb High School in Cape Girardeau, Missouri. In 1950, Beulah was joined in holy matrimony to William Earl Vann. She later became a single parent but was determined to make a better life for her children and two grandchildren she was now raising. This godly woman not only raised her children but proudly raised five of her grandchildren. In her later years she became the caregiver for her daughter, Peggy, and grandson. She raised her children and grandchildren in church and taught them to fear and love God. Her sons as ordained elders, she knew that her praying and teaching was not in vain Beulah joined the sanctified church in Jackson, Missouri (known as) Futrell Memorial Church of God in Christ under The Late "Papa" Mack Futrell, and later joined Futrell Temple Church of God in Christ (Greater Dimension), under The Late Dr. William Bird, Sr. She continued to serve under Pastor William Bird, Jr. until she transitioned. On January 5, 1981, she married Sylvester Perry. They shared eight year together. Every year, she and "Papa Syl" ran a barbeque concession stand at the SEMO District Fair in Cape. After his passing, in 1989, she kept the business going "Eanie" is the nickname that her dear sister, Martha, nieces, nephews, and friends called her. She had a different nickname for her sister, Martha but Eanie's children and the younger generation calls her "Judy". On Thursday, August 20, 2020, Beulah's last conversation was a phone call from one of her friends from church about 5:15 pm. Her beloved sister, "Judy" phoned her, as they always do each night, about 9:00 pm. Beulah did not answer her call because she had already answered the call to come to her "new home." She leaves to mourn her passing two sons, David (Gloria Jean) of St. Louis, Missouri and Mark (Janice), La Palma, California; one daughter, Peggy Vann of Cape Girardeau; one sister, Martha Jean Wilson, Cape Girardeau; 13 grandchildren; 26 great-grandchildren; 18 great-grand-children; and a host of nieces, nephews, relatives and friends. Visitation will be 9:00 am to 11:00 am Wednesday, September 2, 2020 at Ford and Sons Mt. Auburn Funeral Home in Cape Girardeau. Funeral services will follow at 11:00 am Wednesday at the funeral home with the Rev. Steve Betts officiating. Burial will be at Cape County Memorial Park Cemetery in Cape Girardeau. Ford and Sons Funeral Home - Mt. Auburn is in charge of arrangements.

The family of Beulah Perry created this Life Tributes page to make it easy to share your memories.

Beulah Everee Vann Perry was born to the union of Robert Mason...

Send flowers to the Perry family.