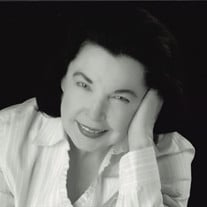 Longtime Cape Girardeau resident Bettie Sue McHaney Talbert, age 85, returned to the arms of God on Sunday, October 4, 2020 after a long term battle with autoimmune pulmonary interstitial disease. The daughter of George and Lois McHaney, born on November 14, 1934 in Marmaduke, Arkansas grew up in Kennett, Missouri where she played basketball in high school and played several musical instruments. She was the drum majorette of her high school band, a member of the National Honor Society and the first of her family to attend college. She graduated from the University of Missouri in 1956, where she was one of the original members of the Mizzou Golden Girls, a drum majorette and twirling squad for the University of Missouri Band. She joined Alpha Delta Pi sorority and in 1953, she led only 14 other members in recruiting 34 new members ,rejuvenating the sorority to great growth and success. In 1955, she was elected as a finalist in the "Savitar" Yearbook contest. After College in 1956, Bettie married her high school sweetheart, Dr. C.R. "Tim" Talbert while he was attending Washington University Medical School in St. Louis. After graduation from the University of Missouri, Mrs. Talbert taught home economics at Ladue High School in St. Louis, Missouri. There she developed and supervised the majorettes and flag corps. Arriving in Cape Giriardeau, she established a training program for the majorettes at Cape Central High School. Bettie has been loyal to the Greek Community and is credited with founding the Delta Nu chapter of the Alpha Delta Pi sorority at SEMO University, from which over 1700 have graduated over the last 52 years. Bettie and Tim moved to Cape with their young family in 1965. They joined Centenary United Methodist Church, began a medical practice and have spent the last 55 years as active members of the community. In 1968, she was named "Outstanding Young Woman of the Year" by the Cape Girardeau Jaycees. In the 1970's Bettie recruited the local medical auxiliary (consisting of physician's wives) to become certified CPR instructors. Together the 12 women trained the local fire department, police, and members of the general public, ultimately resulting in over 1,000 people certified to administer CPR all across Cape County. Bettie was the chairman of the Education Committee of the community betterment project "Cape Go", an officer of the local medical auxiliary, a member of PEO and a member of the SEMO symphony board. In the 1980's she developed Plaza Galleria with an Ice Rink and a skating program for the local youth groups in Cape, producing many skating shows, and winning many competitions with local kids skating in the shows. She established a scholarship fund for the "Outstanding Pledge at Alpha Delta Pi Sorority" and served as Rush Advisor for more than 25 years. In 1970 she was appointed as the sole officer for recruitment for the national ADPi sorority. In 2018, in recognition of her lifelong contributions, she and her husband were named recipients of the Friend of the University Award, the highest honor bestowed by the Southeast Missouri University Foundation. Bettie's life-long passion was landscape gardening at her home in Cape, drawing inspiration from famous gardens world-wide. She currently has over 50 species of plants presently growing at her home. Bettie Talbert is survived by her husband of 64 years, Dr. C.R. "Tim" Talbert of Cape Girardeau; three sons, Tim (Michelle) of Chattanooga, TN, Chris (Shelby) of New York City, NY and Lewis (Kelly) of Austin, TX; as well as five grandchildren, Thomas, Ryan, Susanna, Trace and McHaney Talbert. She is also survived by her niece, Marsha Thompson (Ed) of Cape Girardeau; nephews, Jim McHaney of Atlanta, GA, Dennis McHaney of Austin, TX, and Kenneth McHaney of Memphis, TN; and multiple great nieces and nephews. In lieu of flowers, contributions are encouraged to Centenary United Methodist Church, American Red Cross or American Heart Association. A private family graveside service will be held Wednesday, October 7, 2020 at Fairmount Cemetery.

The family of Bettie Sue McHaney Talbert created this Life Tributes page to make it easy to share your memories.

Send flowers to the Talbert family.