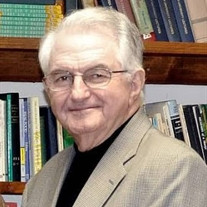 Barney Ray Duffey, born July 1, 1938, passed away at age of 82 at Saint Francis Medical Center Tuesday, Dec. 8, 2020, from complications of COVID-19. Ray was born to Raymond Lee Duffey and Naomi Ruth Williams in Bloomfield, Missouri. He graduated from Bloomfield High School in 1957 and was a member of the track and basketball teams. He and the former Marilyn Sue Graham were united in a marriage lasting 62 years on April 6, 1958. Rarely leaving each other's side in 62 years, it truly was a storybook romance and a lasting example of what marriage should be. After graduating high school, Ray embarked on a career in the trucking industry, holding various management and executive roles, culminating in holding the position of vice president of the Western U.S. Division of Rocor Trucking in California. In 1987, Ray and Marilyn returned to Southeast Missouri, where Ray founded Bootheel Area Rapid Transportation (BART) in Cape Girardeau. He successfully operated BART until his retirement in 2005. BART was awarded the Cape Chamber of Commerce Small Business of the Year in 1998. Ray was a member of the Cape Rotary and SEMO Seniors Golf. His hobbies included golf and his grandchildren. He was a member of the Jackson Church of Christ, where he served as an elder and Bible teacher until 2020, when his health no longer allowed him to serve. An unfailingly kind and gentle man, Ray was known for always having a steady hand on the wheel. Service to the Lord was the most important thing in his life, and he indeed epitomized a servant's heart. He is survived by the love of his life for 62 years, Marilyn Duffey of Cape; two children, Timothy Charles Duffey and Lesa Rene Gilliland, both of Cape; the apples of his eye, five grandchildren, Alissa Young of Jackson, Brady, Crissy, Blake and Beau Gilliland, all of Cape. He was blessed to love a great-grandson, Levi James Young of Jackson. Also surviving are two sisters, Nelda Warrick of Bloomfield and Wanda Duffey of St Louis. He was preceded in death by his parents; two sisters, Valma Dye and Doris Blankenship; a stepbrother, Billy Collins; and stepmother, Loretta Duffey. Due to Marilyn's frail health as she recovers from COVID and because of the pandemic, there will be no services at this time. A celebration of his extraordinary life will take place later at the Jackson Church of Christ. Burial will be at Walker Cemetery in Bloomfield. In lieu of flowers, the family suggests donations to the Curtis James Memorial Scholarship, c/o Jackson Church of Christ, 310 N. Shawnee, Jackson, MO 63755. Ford and Sons Mount Auburn Funeral Home is in charge of the arrangements.

The family of Barney Ray Duffey created this Life Tributes page to make it easy to share your memories.

Send flowers to the Duffey family.