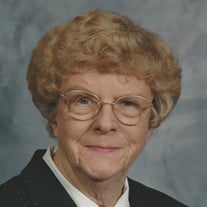 Barbara Ellen Nichols Calvin, 91, of Cape Girardeau died Tuesday, March 29, 2022 at Chateau Girardeau. Barbara was born on December 28, 1930 in Davenport, Iowa. She was the daughter of Irma M. and Glenn O. Nichols. She spent her childhood years in Maquoketa, Iowa and Sidney, Iowa. She attended Cottey College and the University of Iowa, where she earned the BFA degree in 1952. She and Edward E. Calvin were married on June 14, 1953. He passed away on January 22, 2004. Barbara spent many years as a graphic artist in Kansas City, Missouri working for an interior design company, an advertising agency and Russell Stover Candies. Upon her husband's graduation from law school and his service in the U. S.Navy, they lived in Poplar Bluff, Missouri, Bay St. Louis, Mississippi and Richmond, Missouri where she continued working as a commercial artist on a free lance basis. Upon moving to Cape Girardeau, Missouri in 1973, she became active in the early development of Chateau Girardeau and served as Marketing and Public Relations Director until the opening of the facility in 1979. She then became Assistant Administrator until 1984 when she became Administrator, serving as such until her retirement in 1998. She was a 60 year member of P.E.O. She was active in the Otahki Girl Scout Council, serving on the Board of Directors, as Vice President and President of the Council. She was awarded the Thanks Badge and the Women's Impact Award. She was a member of the First Presbyterian Church in Cape Girardeau, serving several terms as a member of the Session. She is survived by her daughter, Jennifer Helen (Mike) Chanley; sons, Gregory Edward Calvin and Whitney Nichols (Carla) Calvin; grandchildren, Bryce Edward Abasolo, Erin Elisa-Ysabel Abasolo, Brittney Shawntae (Justin) Amelunke, Melinda Ann (Kasey) Rutherford, Mark Todd Calvin and Mary Renee Calvin; and great-grandchildren, Allie K., Leah Ann and Bradley Ray Amelunke. A memorial service will be held at 10:00 am on Saturday, May 21, 2022, at First Presbyterian Church in Cape Girardeau. In lieu of flowers, memorial contributions may be given to First Presbyterian Church of Cape Girardeau or Chateau Girardeau Foundation. Online condolences may be made at www.fordandsonsfuneralhome.com. Ford & Sons Funeral Home is in charge of arrangements.

Barbara Ellen Nichols Calvin, 91, of Cape Girardeau died Tuesday, March 29, 2022 at Chateau Girardeau. Barbara was born on December 28, 1930 in Davenport, Iowa. She was the daughter of Irma M. and Glenn O. Nichols. She spent her childhood... View Obituary & Service Information

The family of Barbara Calvin created this Life Tributes page to make it easy to share your memories.

Send flowers to the Calvin family.