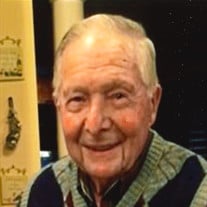 Arthur Lee Obermann, 94, of Jackson, Missouri died Friday, July 2, 2021 at Southeast Hospital in Cape Girardeau. He was born April 14, 1927 in Oran, MO to Arthur Herman and Hermina Baundistle Obermann. He and Betty Ann Fuhrmann were married January 10, 1948 at Advance, Missouri. She preceded him in death on April 13, 2011. Arthur served in the Army Air Force Corp. during World War II serving in the North Atlantic. Arthur was owner and operator of Obermann and Sons Heating and Plumbing in Jackson for 22 years. He was a member of Immaculate Conception Catholic Church and American Legion Post 158 Altenthal-Joerns. Survivors include daughter, Doris "Sister Dory" Obermann of O'Fallon, Missouri; daughter-in-law, Janice Obermann of Maryville, Washington; two grandchildren, Ronald Lee (Karen) Obermann Jr. of Jackson, Missouri and Nicole Singh of Maryville, Washington; a great-granddaughter, Isabelle Singh; and a sister, Jo Ann Moore of Cape Girardeau. He was preceded in death by his parents; wife; a son, Ronald Lee Obermann Sr.; three brothers, Robert, Earl and Elmer Obermann; and a sister, Leona Friga. Visitation will be 4:00 pm to 8:00 pm Monday, July 12, 2021 at Ford and Sons Funeral Home in Jackson, with parish prayers at 7:00 pm. Funeral Mass will be at 11:00 am Tuesday, July 13, 2021 at Immaculate Conception Catholic Church in Jackson with the Rev. Randolph Tochtrop officiating. There will be no visitation the day of the service. Burial will be at Russell Heights Cemetery in Jackson with full military honors. Memorial contributions may be given to Immaculate Conception School, 300 S. Hope Street, Jackson, MO 63755. Online condolences may be made at www.fordandsonsfuneralhome.com. Ford and Sons Funeral Home - Jackson is in charge of arrangements.

The family of Arthur Lee Obermann created this Life Tributes page to make it easy to share your memories.

Send flowers to the Obermann family.