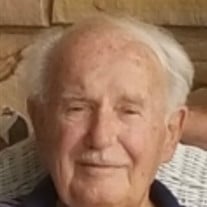 Arnold L. Edwards, 93, of Cape Girardeau died Monday, November 16, 2020 at Southeast Hospital. He was born December 31, 1926 in Cape Girardeau to James and Pearl Brown Edwards. He and Nina Cruce were married in 1947 in Cape Girardeau. She... View Obituary & Service Information

The family of Arnold L. Edwards created this Life Tributes page to make it easy to share your memories.

Send flowers to the Edwards family.