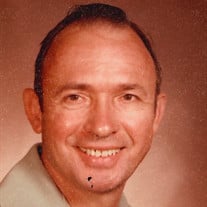 Archie H. Sprengel, 90, of Cape Girardeau passed away at the Lutheran Home Wednesday, June 2, 2021. He was born May 13, 1931 in Cape Girardeau, MO to August and Letha Wallace Sprengel. He and Mae Sue Beal were married May 15, 1954 at Trinity Lutheran Church in Cape Girardeau. He served in the Army National Guard for 36 years. He was employed by Bamby Bakery and Bunny Bread before working in dormitory maintenance for 26 years at Southeast Missouri State University, retiring on July 1, 1992. Archie was a member of Trinity Lutheran Church and served as an Elder, Trustee, and Usher. He was a member of the Voters Assembly and the Men's Club. Survivors include his wife; sons, Archie Wayne (Ann) Sprengel of Cape Girardeau and Mark (Christy) Sprengel of Jackson, MO; two sisters, Ruth Langston of Cape Girardeau and Wanda (Clarence) Perr of Brea, CA; sister-in-law Joella Arnzen of Cape Girardeau; grandchildren, Michael Sprengel of Fort Collins, CO, Gregory (Kathryn) Sprengel of Argyle, TX, Russell Sprengel of Dallas, TX, Megan Sprengel (fiancé Andrew Neely) of Fayetteville, NC, and Lucas Sprengel of Jackson, MO; great-grandchildren Kimberly and Vance Sprengel of Argyle, TX as well as several nieces and nephews. In addition to his parents, he was preceded in death by brothers ,George and August Sprengel and sister, Shirley Swan. The family would like to extend a special thanks to the staff at Saxony Village and the Lutheran Home for the kind and attentive care given to Archie during his time there. A private graveside service will be held Tuesday, June 8th at Fairmont Cemetery with Rev. Douglas Breite officiating. A memorial service is planned for a later date. Memorial contributions may be made to Trinity Lutheran Church. Ford and Sons Mount Auburn Funeral Home is in charge of arrangements.

Archie H. Sprengel, 90, of Cape Girardeau passed away at the Lutheran Home Wednesday, June 2, 2021. He was born May 13, 1931 in Cape Girardeau, MO to August and Letha Wallace Sprengel. He and Mae Sue Beal were married May 15, 1954 at Trinity... View Obituary & Service Information

The family of Archie H. Sprengel created this Life Tributes page to make it easy to share your memories.

Archie H. Sprengel, 90, of Cape Girardeau passed away at the...

Send flowers to the Sprengel family.