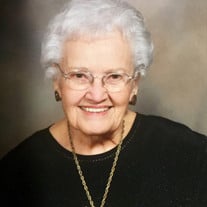 Annabelle McAlpin Spencer, 101, passed away Saturday, Jan. 15, 2022, in Jackson. Born Nov. 30, 1920, in Greenwood, Indiana, she entered Franklin College in Franklin, Indiana, at age 16. Here she eventually met her husband, John Bunyan Spencer. After both graduated, Annabelle supported her husband in his career, first as a Baptist minister in Alexandria, Ohio, and Morocco, Indiana, and then as a professor of religion at Keuka College in Keuka Park, New York, and Kalamazoo College in Kalamazoo, Michigan. She balanced raising a family while also working as a secretary at the University of Chicago and then at Western Michigan University. As well as caring for the household and three children, Annabelle lovingly cared for her aged parents and then her husband's aged parents. In Kalamazoo, their church sponsored a Chinese-Vietnamese family (refugees from the Vietnam War) and opened their home to some of the children until their families could be fully reunited. The families maintained a connection to Annabelle and have prospered in the United States. Annabelle valued education and supported her children and grandchildren in pursuing their academic and career pursuits. She was beloved by her entire extended family. After her husband's passing in 1987, Annabelle embarked on a new life in Sebring, Florida, volunteering and taking up bird watching, including taking the lead and arranging birding trips through the Highlands County Audubon Society. She also traveled the world with friends and family, from Europe to the Dry Tortugas, and enjoyed warming her many guests from the frozen north by hosting them in her home in Florida. Annabelle was also an accomplished bridge player and enjoyed this activity late into her 90s. In 2010, she moved to Cape Girardeau to be nearer to family and enjoyed many friends at the Saxony Village Retirement Community and the Villas of Jackson. She was a member of the First Presbyterian Church of Cape Girardeau. Annabelle was preceded in death by her parents, Robert Boyd McAlpin and Bertha Terman McAlpin; husband, John Bunyan Spencer; and son, Robert Burns Spencer. She is survived by her son, Theodore James (Donna) Spencer; her daughter, Jean Louise (Gail) Spencer; and numerous grandchildren and great-grandchildren. A memorial service will be at 1:30 p.m. Jan. 29 at Ford and Sons Mount Auburn Chapel in Cape Girardeau. Memorial contributions may be made to Exotic Feline Rescue Center (efrc.org/) or Highlands County Audubon Society (highlandsaudubon.org/) or the charity of your choice. Online condolences may be made at www.fordandsonsfuneralhome.com.

The family of Annabelle Spencer created this Life Tributes page to make it easy to share your memories.

Send flowers to the Spencer family.