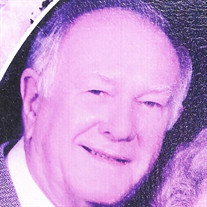 Alvin (Al) F. Turner age 88 of Cape Girardeau, son of Elmer and Sylvia (Puhse) Turner passed away as a result of Covid-19 on January 29 at the Lutheran Home. He was born September 5, 1932, in Granite City, Illinois. He and Mary Janet Grebing were married at Trinity Lutheran Church on April 21, 1957. They were married 63 years at the time of his death. Al was a graduate of Granite City High School and a graduate of St. Louis University. He served in the U.S. Army as a Signal Corp. Instructor for 2 years. He worked at McDonald Douglas for several years and then joined the Unidynamics Division of Universal March as a purchasing agent. When this division was closed, he was employed as Assistant Business Manager in the Granite City School District. At age 40 Al returned to college to get his education requirements to become a teacher. The rest of his working life he taught heating and air conditioning, and also participated in the Co-Op program, placing students in the community to work half days in various jobs. He retired in 1991. The eighteen years living at the Lake of the Ozarks were the happiest time in his life. His hobbies were boating, fishing, trap shooting, woodworking, traveling and canoeing. He was a member of Trinity Lutheran Church, American Legion Post #63, and American Rifleman. Loving survivors are his wife, Mary; daughter, Dr. Kim Turner of Maine; brother-in-law, Walt Grebing (Jan); two nieces, Marci Grebing, and Kara Bettis; great niece and nephew, Mia and Nolan Bettis. He was preceded in death by his parents, Elmer and Sylvia (Puhse) Turner. Visitation will be at Ford and Sons Funeral Home on Mount Auburn Road on Tuesday, Feb. 2 at 1:00 p.m. and services will follow at 2:00 p.m. with Pastor Douglas C. Breite officiating. Burial will follow with full military honors at Hanover Lutheran Church Cemetery. Memorial contributions may be given to Trinity Lutheran Church or Juvenile Diabetic Research Foundation (JDRF), 26 Broadway, 14th Floor, New York, NY 10004.

Alvin (Al) F. Turner age 88 of Cape Girardeau, son of Elmer and Sylvia (Puhse) Turner passed away as a result of Covid-19 on January 29 at the Lutheran Home. He was born September 5, 1932, in Granite City, Illinois. He and Mary Janet Grebing... View Obituary & Service Information

The family of Alvin (Al) F. Turner created this Life Tributes page to make it easy to share your memories.

Send flowers to the Turner family.