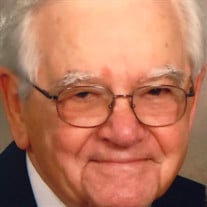 Alton Bray, at the age of 100 years, passed on to Heaven on Friday July 3, 2020 at the Chateau Girardeau in Cape Girardeau, Missouri. He was born on October 25, 1919 in Fornfelt, Missouri to Luther Warner Bray and Ora Lee Templeton Bray. Alton attended Fornfelt Public Schools where he graduated from high school in 1937. He graduated from Southeast Missouri Teacher’s College (now Southeast Missouri State University) in 1941 with a Bachelor of Science in Education degree, with a focus on mathematics and physics. Alton and his three bothers, played semi-pro baseball with the Big Bucks and the Capahas. He refereed basketball and umpired baseball for many years. Alton taught mathematics and coached girls and boys basketball, from 1941 to 1942 at Benton High School. From 1942 to 1943, Alton became a civilian radar instructor with the United States Air Force in Boca Raton, Florida. In 1943 Alton returned to Cape Girardeau at Southeast, where he taught mathematics and physics as a part of the V-12 program. Alton married Martha Lou Dorris in 1944. Alton and Martha celebrated 66 years of marriage before Martha’s passing at the age of 87 years in 2011. In 1946 he began serving as a purchasing agent at Southeast until 1951, when he was named Registrar at Southeast until his retirement in 1984. In 1962, while at Southeast, Alton was instrumental in the purchase of an IBM mainframe computer system that was installed in the basement of Academic Hall. This achievement introduced the university to modern computing and it established a more efficient, accurate and rapid acquisition of records which was the main responsibility of Alton’s division. Alton served on several advisory committees at Southeast. He served on the board at the Baptist Student Center for over 40 years. He also served four years as secretary and four years as president of the Missouri Intercollegiate Athletic Association. Alton demonstrated his Christian faith in every aspect of his life. He was a Sunday school teacher and close advisor to the First Baptist Church of Cape Girardeau. He served as Master of St. Marks Lodge, Scottish Rite. Alton and Martha are survived by their three children Ellen Louise Busch, Florissant Missouri, Mary Suzanne Newberry (John), Katy, Texas, Jeffrey Owen Bray (Debra), Chesterfield, Missouri; six grandchildren, Mark Christopher Busch, Barbara Ann Newberry-Smith (Jeremy), Brian Douglas Newberry (Jessica), Kyle Anthony Bray (Ashley), Haley Nicole Bray, Jordan Owen Bray; four great-grandchildren, Devin Christopher Busch, Madelyn Nicole Busch, Ryland Mcrae Rivas, Nathaniel Anthony Bray and many beloved nieces and nephews. Because of safety concerns and the current pandemic, a private service will be held with burial to follow. In lieu of flowers, the family asks for donations to be made to the Baptist Student Center, P.O. Box 1923, Cape Girardeau, Missouri 63702 or to the Alton Bray Scholarship at Southeast Missouri University Foundation, 1 University Plaza, MS 7300, Cape Girardeau, Missouri 63701.

Alton Bray, at the age of 100 years, passed on to Heaven on Friday July 3, 2020 at the Chateau Girardeau in Cape Girardeau, Missouri. He was born on October 25, 1919 in Fornfelt, Missouri to Luther Warner Bray and Ora Lee Templeton Bray. Alton... View Obituary & Service Information

The family of Alton Bray created this Life Tributes page to make it easy to share your memories.

Send flowers to the Bray family.