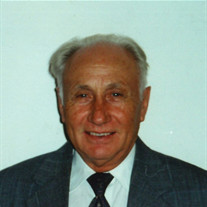 The Rev. Adam Mueller, 89, went home to be with the Lord Jesus Christ Thursday, Oct. 29, 2020, after a full life of devotion to God, his family and love and care for those that came across his path in this life. Adam was born July 1, 1931, to German farming parents, August and Magdalene Mueller, in Hoffnungstal, Bessarabia, in present day Romania. His family endured many trials and hardships in Germany during World War II, but always kept faith in God. After the war, he trained and worked in construction in the rebuilding of Germany. He carried this early life enjoyment of masonry, farming, gardening and hard work in general throughout his life. He maintained a lifelong fondness for his German homeland and heritage, and was grateful for all the opportunities and blessings of his chosen home in America. As a young man he found meaning and truth in this life, and the hope and assurance of the next, by putting his faith and trust in Jesus as Savior and Lord. The call of God to Christian ministry would then define the rest of his life. This took him in 1955 to the Liebenzell Mission and Theological Seminary in the Black Forest region of Germany. He married Margarete Dauble on May 21, 1960, a young woman in their shared youth group from Besigheim, Germany. Margarete would be by his side the remainder of his life. In 1961 they began their life ministry and adventure together by being sent as missionaries to the Micronesian Island of Yap and surrounding region in the South Pacific. They compiled photos, slides and memories from the three years of this work, which he enjoyed showing and talking about the rest of his life. In 1964 Adam and Margarete and a growing family moved to North America. After a time of ministering to a population of German Christians in Hamilton, Ontario, Canada, and training at Concordia Seminary in Springfield, Illinois, Adam was ordained a minister in the Lutheran Church, Missouri Synod. In 1970 Adam accepted a pastorate to Trinity Lutheran Church, a small country church in Friedheim, Missouri. This was a wonderful place to raise their growing family and serve the Lord. They shared a love and fondness for the people of the church and region, and had many happy memories of their time in this rural community. After 21 years at Friedheim, Adam retired from full-time ministry. They moved to Cape Girardeau into a house that Adam put a lot of his own labor into building. He very much enjoyed family gatherings and seeing his grandchildren, and taking care of the lawn, vegetable garden and many trees he planted and nurtured. He and Margarete continued to serve in ministry on a part-time basis as various churches in the Southeast Missouri region, particularly Faith Lutheran Church in Dexter, Missouri. They developed many friendships and memories with the people there that have been a blessing to them. Adam is survived by his loving wife and caretaker, Margarete Mueller; his children, Magdalene (Mark) Vogel of Jackson; Markus (Cheryl) Mueller of Jackson; Paul (Kristiana) Mueller of St. Charles, Missouri; Samuel (Lauren) Mueller of Atlanta, Georgia; Elizabeth (Kevin) Haskamp of Columbia, Missouri; and Rebekah (Rob) Moore of Jackson. His grandchildren have brought him much joy and pride, Aaron Mueller, Zachary and Joshua Vogel, Levi, Noah and Ira Haskamp, Matthew and Jacob Moore and Maria Mueller, and stepgrandchild, Stacy Jones. He was preceded in death by his parents; brothers, Albert and Alfred Mueller; and sisters, Alma Singer, Anna Singer and Albina Richter. Due to the current pandemic there will be no visitation. A private service will be Monday at Ford and Sons Mount Auburn Chapel with the Rev. Weston Wildauer officiating. Entombment will be at Cape County Memorial Park Mausoleum in Cape Girardeau. Memorial contributions may be given to Liebenzell Mission, c/o Margarete Mueller, 2825 Bloomfield Road, Apt. 240, Cape Girardeau, MO 63703; Good Shepard Lutheran Chapel, 1904 W. Cape Rock Drive, Cape Girardeau, MO 63701; Trinity Lutheran Church, 3700 County Road 415, Friedheim, MO 63747, or a charity of choice. Online condolences may be made at fordandsonsfuneralhome.com.

The Rev. Adam Mueller, 89, went home to be with the Lord Jesus Christ Thursday, Oct. 29, 2020, after a full life of devotion to God, his family and love and care for those that came across his path in this life. Adam was born July 1, 1931, to... View Obituary & Service Information

The family of Adam Mueller created this Life Tributes page to make it easy to share your memories.

Send flowers to the Mueller family.